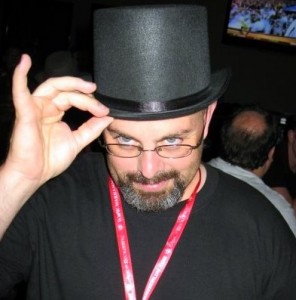 Mike and his wife–you may know her my oft-time collaborator, the award-nominated Janet “J.K.” Lee–have been some of my very best friends for a very long time. Since leaving Tennessee, I miss them dearly. Which makes being able to interview Mike for this blog a personal treat for me.

Mac or PC?
Mac for life! I used a PC for many years, but then my wife Janet got a MacBook a few years ago. It took less than fifteen minutes to set up. I swear I heard a choir of angels singing. Naturally, there was no going back after that.

Coffee or Tea?
Coffee. French press, and way too much of it. I do most of my writing at a coffee shop down the street from my house. I’ve been working there for so long that I have my own table.

Travel the World or Travel Outer Space?
Tough question. Although I’ve always dreamed of commanding a starship, so I’ll go with outer space. 😉

Fantasy or Science Fiction?
Fantasy – although that’s kind of a cheat, because there’s no reason why you can’t use the trappings of space travel and advanced tech in a fantasy tale. Is Star Wars fantasy or science fiction, in the strictest sense of the word? I’d argue that its fantasy, through and through.

Music or Silence (while you write)?
My preference is silence – or at least, white noise. Music is distracting – although listening to music at the gym while working out generally helps to clear my head before writing, so there’s that.

What weird food do you like?
Are Peeps food? I’m going to go with yes.

What is one of your most irrational fears?
Being trapped inside a sinking ship. Don’t ask me why. I have no idea. It’s not like I grew up sailing or living next to the sea.

Did you watch the Royal Wedding? Why or why not?
Nope. I honestly don’t get the fascination. I mean, sure, the pomp and pageantry are beautiful, but that sort of thing generally doesn’t appeal to me.

How many novels/short stories/screenplays/poems/etc have you published?
So far, I’ve published ten media tie-in novels (one under a pseudonym – long story), three novellas, five short stories, and ten video game scripts, plus contributions to more than thirty tabletop role-playing game rulebooks and supplements. I’ve been writing professionally since 1996, and became a full-time writer ten years later. And I feel like I’m only just getting started. 😉

How much do you write every day?
You’re assuming I have anything like a stable writing schedule. 😉 Generally I’m doing well to get 1,000 to 2,000 words written. Often it’s much less.

How much do you WISH you could write every day?
Once upon a time, 4,000 words a day was normal. I’d like to get back to that.

What are you working on now?
At the moment I’m working on my eleventh tie-in novel, which is the next installment in the Malus Darkblade fantasy series. Malus is a dark elf, and on his good days is a ruthless, scheming SOB. For some reason, he’s a really popular character in Warhammer Fantasy circles.

If you could write like one author, who would it be?
This is a trick question, isn’t it? 😉 There are so many writers, past and present, whose skills I envy and admire, but I wouldn’t necessarily want to write like any of them. Having said that, some of the writers I admire most are, in no particular order: Robert Howard, Michael Moorcock and Fritz Leiber.

If you could be one superhero, or have one superpower, who/what would it be?
I’d like to have the power to stop time. There would be no deadline in the world I couldn’t defeat. 😉

What’s the coolest thing you’ve ever done?
Writing for video games in general is really, really cool. You never know what’s going to be asked of you from one moment to the next, or who you might end up working with. One of the coolest things I’ve done was to write the lyrics for a military anthem that were then translated into Russian and sung by a full men’s choir – all within a 24-hour period. And thanks to the skills of a very talented composer and his performers, it sounded amazing.

What’s the coolest thing you’re about to do?
I can’t tell you. 😉 Honestly, it’s under NDA. Check back with me later in the year. Maybe I’ll be able to talk about it then.

Name three things on your List of Things to Do Before You Die.
Easy!
1.) Write my own original fiction.
2.) Hit the New York Times Bestseller List. Repeatedly.
3.) Learn to joust.
I think that’s pretty reasonable. 🙂

Mike Lee is a novelist, scriptwriter and game designer, whose most recent credits include Nagash the Immortal, the conclusion to the epic Time of Legends trilogy, and Fallen Angels, a story of conflict and betrayal set in Black Library Publishing’s best-selling Horus Heresy series. Along with UK author Dan Abnett, Mike also wrote the five-volume Chronicles of Malus Darkblade, whose signature character has become a cult favorite among fans of Black Library’s Warhammer Fantasy fiction.

In addition to his novels, Mike’s scriptwriting credits include Splinter Cell: Conviction, the hit sequel to the popular Splinter Cell franchise, and Tom Clancy’s HAWX, a game of near-future jet combat. He has also contributed to more than two dozen pen-and-paper role-playing games and supplements, including the award-winning Vampire: The Masquerade, Adventure!, Vampire: Dark Ages and Hunter: The Reckoning, published by White Wolf Games Studio.

An avid wargamer, history buff and devoted fan of two-fisted pulp adventure, Mike lives with his wife, artist JK Lee, and their family in the United States.