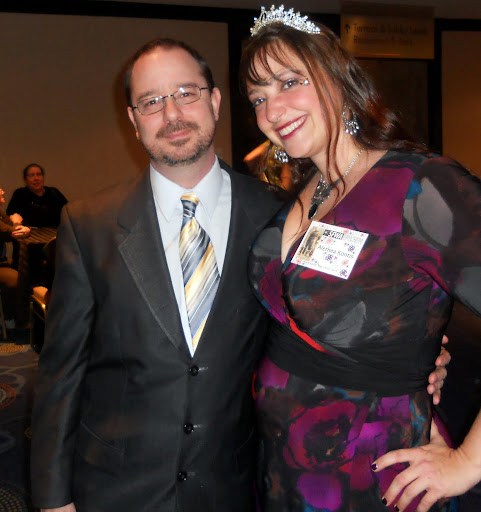 The Prez & The Princess

Juggling is a precious talent. It’s so much fun to see so many things flying in the air over your head. You feel so giddy when they’re up there, so proud of yourself that you have come so far and are able to do so much. In that moment, you’re on top of the world.

God have mercy on your soul if you ever fall behind.

What with pushing myself to the edge and trying to be everything (and almost succeeding) I needed some time to recover that didn’t include new jobs and sick children and dusty to-do lists…but I don’t get to choose that part. Instead, I write notes to myself on the iPhone while I’m half-blind on the elliptical machine in the morning and I keep everyone hydrated and full of vitamins and I wash my new apron and stay until midnight to unload the truck if that’s what needs to be done. And if I don’t get to write about this past Nebula Awards weekend until Thursday (while I’m supposed to be recording another Fairy Tale Theatre podcast), that doesn’t make what happened there any less special.

I have this saying — I don’t remember when I came up with it, or to whom I said it first, but I’ve been saying it for a few months now: Strangers are just best friends I haven’t met yet. I do, in my heart, honestly believe that each one of us is special. Optimistic and crazy, oh yes, I am fully aware. But as a princess, that’s my prerogative.

But I made a choice when Andre Norton died. When I got home Sunday night, I pulled Beauty & Dynamite off the shelf and read that essay again in the twilight to remind myself of the exact words.  I love having friends. I want as many as my heart can hold. I want them all. Even if it means that eventually and painfully I’ll have to lose every single one. The minutes and hours and years on the roller coaster of happiness and sadness with them are worth every second of gray numbness.’Cause when I get to heaven, I want there to be a heck of a lot more than five people waiting.

Friends are worth all the additional balls you have to juggle, and every bullet point on a never-ending to-do list.

Nebula nominee Barry Deutsch appropriately summed up the Nebula Weekend by saying that the convention was a very small group of people with a much higher ratio of really cool folks to the socially awkward off-putting variety. With that in mind, I took the opportunity to step way out of my box and introduce myself to people I didn’t know. I roomed the first night with a friend and a stranger. I threw myself into the one workshop I signed up for and the two that I audited. I sat down next to people I didn’t know and chatted with them until we stood up as friends. I was sure to gush compliments when compliments were due and asked to lend a hand if one was needed. I stayed up until way past my bedtime and I was babbling and incoherent. I took pictures whenever I remembered that I had a camera. And I wore the tiara, because Mary Rodgers reminded me that I wouldn’t be the same without it. She was right.

I would list all the new and wonderful friends I met this weekend, but I won’t — first, out of fear of forgetting someone, and second, because I need to email them all or add them on Twitter or tag them on Facebook, and I’ve spent far too much time on this blog post already. Suffice it to say that I have no idea why Kate Baker and I hadn’t met before, but I’m awfully glad we finally did. Michael Whelan is a fabulously nice guy, and far more approachable than I ever imagined. MK Hobson can seriously rock a dress, and Rachel Swirsky’s gorgeous jewelry brings out my dragonlike tendencies. Amal El-Mohtar can bring the shiny with me any day. Walter Cuirle needs to host his own radio show. Mike Zipser asks great questions. Bud Sparhawk tells great stories. Myke Cole is very good for my ego. Emily Whitten is a godsend from Geek Heaven. John Grace has great taste in comics, Eric Fullilove has great taste in t-shirts, and Shannon Rampe and Trodayne Northern have  impeccable taste in hats. Janice Shoults is a woman after my own heart. Kathy Morrow has great patience. Peggy Rae Sapienza and Bill Lawhorn can do anything, I am sure of it. 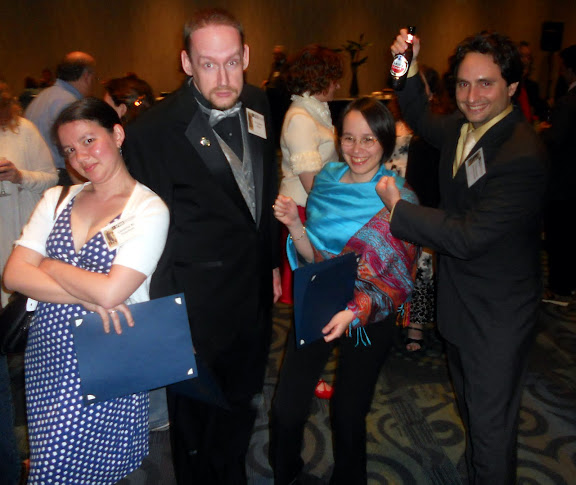 Possibly even more fun than making new friends was seeing the old ones–most especially, the Codex Writers. Every year that goes by I am so happy that the handful of us little kids with big ideas came up with that place. They are the family that gets reunited whenever there’s an event like this…even when we’ve never met in person. We still know each other. We have that much more in common. We can cheer like hell when one of us walks away with an award…and then stand up and do it all over again when one of us walks away with the next one, too.

Eric, I am so freaking proud of you. I’m still busting at the seams. When you shared your precious bag of Reese’s Sticks with me while my left leg was going numb in that hard plastic chair at Orson Scott Card’s boot camp–even after I’d threatened to slap your characters–who knew that we would be here right now? Who knew how far we would go? Who knows how far yet we still can? I hope that every time you see that shiny award you remember what it felt like…but right on the heels I hope is the memory of sitting at that lunch table with me and Scott Roberts while we each confessed to the fact that we were still freaking out inside at random intervals to the theme of “Holy crap, that’s Orson Scott Card right there!”

For me, watching Eric walk on stage and accept the Nebula Award this weekend was second only to watching Mary Robinette Kowal accept the John W. Campbell Award. It is so hard to believe that these people I love so dearly were strangers to me once. I can hardly remember a time before the Reese’s Sticks and the keys locked in the car running in my driveway (that was Mary). I know it’s true, though. We might have passed in an airport sometime in those first couple of decades, or waited in the same line at the World’s Fair. Back in those days, we were just best friends that hadn’t met yet.

Imagine what life would be like if we’d realized it then.