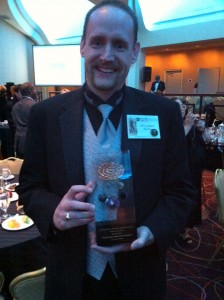 Eric and I were Orson Scott Card Boot Camp buddies in 2003, and we both helped Luc Reid and Lawrence Schoen found the Codex Writers Group in 2004. Hard to believe it’s been almost a decade. What a decade it’s been! Any excuse I have to host Eric on this site is a good one. And if you haven’t read his novel Unforgettable, you really should.

Oh–and when he takes over the world, I still get to be princess.

Mac or PC?
PC. However, it seems half my family have been converted to the cult of Mac, so I may be genetically vulnerable to infection.

Coffee or Tea?
No thanks, I’m Mormon.

Travel the World or Travel Outer Space?
I really hope that the cost curve for space travel comes down fast enough and my disposable income curve goes up fast enough that they intersect before I die.

Fantasy or Science Fiction?
Yes. I write (and read) everything from hard science fiction to soft fantasy, with a little humorous horror thrown in.

Music or Silence (while you write)?
Usually silence, but otherwise Russian techno.

What weird food do you like?
Dulce de batata. It’s an Argentine delicacy made from sweet potatoes, and it’s much more awesome than it sounds.

What is one of your most irrational fears?
Moths. When I was about six or seven, my family lived in Venezuela, where they have rather large moths. I slept on the bottom bunk of bunk beds, and one morning I woke up to see a moth with a wingspan of several inches clinging to the top bunk right above my face. And it had already eaten the face off one of my sisters. Okay, I made that last sentence up, but the rest is true, and moths have given me the willies ever since.

How many novels/short stories/screenplays/poems/etc have you published?
Over two dozen short fiction pieces, including “The greatest science-fiction story ever written”. I also have e-published my novel Unforgettable.

How much do you write every day?
Not enough.

How much do you WISH you could write every day?
“…[I]f wishes were horses, we’d all be eatin’ steak.” –Jayne Cobb

What are you working on now?
Filling out this questionnaire for your website. Oh, you mean writing-wise? I’m getting geared up to write a third novel and kicking around some short fiction ideas.

If you could write like one author, who would it be?
Orson Scott Card. He has a knack for writing complex characters, which is one of my weak spots.

If you could be one superhero, or have one superpower, who/what would it be?
Nice try. You’re not going to trick me into revealing my secret identity.

What’s the coolest thing you’re about to do?
Lose a Hugo Award. Or possibly win one. But losing a Hugo Award is still very cool.

Name three things on your List of Things to Do Before You Die.
1. Go into space.
2. Visit Egypt and Israel.
3. Upload my mind into a supercomputer and take over the world.

A Nebula Award winner, Hugo Award nominee, and winner in the Writers of the Future Contest, Eric James Stone has had stories published in Year’s Best SF 15, Analog, Nature, and Kevin J. Anderson’s Blood Lite anthologies of humorous horror, among other venues.  Eric is also an assistant editor for Intergalactic Medicine Show.

One of Eric’s earliest memories is of an Apollo launch on television. Thanks to his father’s old science fiction collection, Eric grew up reading Asimov and Heinlein. Eric attended Orson Scott Card’s Literary Boot Camp and the Odyssey Writing Workshop. Eric lives in Utah.  His website is www.ericjamesstone.com.