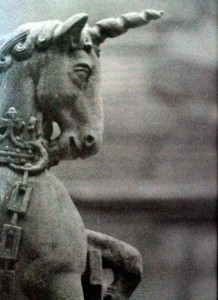 But I will admit…I do have a favorite short story. To this date, my favorite story that I’ve ever written is “The Unicorn Hunter.” I dreamed up the concept a very long time ago: if a certain unsavory character wanted to hunt unicorns, what better bait to use than “the fairest of them all”? But the story never came together. There was something missing. Until John Skipp asked me to contribute a story for his Demons anthology and it hit me. My missing element was A DEMON. Four days later, I wept as I wrote the last line because I didn’t want the story to be over.

Skipp published “The Unicorn Hunter” in his anthology, placing me right next to Neil Gaiman (again!). Apart from that claim to fame–and a very enthusiastic show of support from SF author Cat Rambo–nothing else really happened with the tale. But it was still my favorite.

That’s the thing about favorites. We just can’t let them go. I held onto these two characters so tightly that I wrote them right into the Woodcutter-filled world of Arilland. And when I assembled all of my fairy tale short stories into Tales of Arilland, I knew that “The Unicorn Hunter” had to be first in the Table of Contents.

While no names are used in the short story, it’s clear from the first paragraph which princess is being referenced. And while it’s not terribly obvious when Ashes makes her cameo appearance in Hero, eagle-eyed fans were incredibly excited to put two and two together. As was I.

This interview was posted on a friend’s website right around the release of the anthology. That post has gone the way of the Internet Black Hole–for that reason, I am publishing it again here for you to enjoy.

Perhaps in the next fairy tale anthology, I will include all the Troubadour interviews I’ve done with my characters. Come to think of it…I’m really going to need to write this Troubadour into Arilland, aren’t I? Oh, that will be FUN…

Interview with The Princess Formerly Known as Snow White 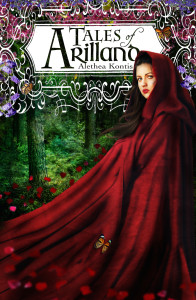 Troubadour: I’m here today with Her Royal Majesty Princess Snow White, who has agreed to speak with us about some of the challenges she faced during her tumultuous–and infamous–childhood.

Princess: I agreed to meet with you only because my story-loving aunt sent you. I don’t want to talk about Snow White. She was a silly, stupid princess, and her jealous stepmother killed her. My name is Ashes-on-the-Wind.

Troubadour: Please forgive my impertinence. May I call you Ashes-on-the-Wind?

Princess: You may call me “Your Highness.” And I would thank you to not go transforming what I’m about to say to you into some sappy ballad; I don’t care what Aunt Sunday says.

Troubadour: I’ll do my best, Your Highness. But I really must implore you–the world is desperate to know what happened to that beautiful little girl the Huntsman led into the forest so many years ago. Were you frightened? Did he attack you?

Princess: (sighs and touches her left shoulder, briefly) I wasn’t afraid until he attacked me. But he didn’t get very far. I was saved by a…Unicorn Hunter.

Troubadour: Rumor has it that this Unicorn Hunter was a demon.

Princess: There are no such things as demons or unicorns, and don’t you dare tell the world any differently. I won’t have innocent girls or arrogant men chasing after either. I am the only one who knows what happened in that forest, and you will take me at my word.

Troubadour: As you wish, Your Highness. So this Unicorn Hunter–whatever his origin–saved you from certain peril?

Princess: He did. He needed my virtue intact, you see, to catch the unicorns. One can be the fairest of them all and still lose her virtue. (A far away look haunts her eyes) Instead, I lost my innocence.

Troubadour: The two of you became friends?

Princess: Yes. I believe we did.

Troubadour: Do you and the Unicorn Hunter still keep in touch?

Princess: No. He is…no longer a part of my life. I moved in with a band of hardworking miners and moved on with my life, just as we should move on with this interview.

Troubadour: Yes, Your Highness. One more question, if I may?

Princess: If you must.

Troubadour: It is also rumored that you are currently employed on a pirate ship. Is that correct?

Princess: (Smiles broadly) That is correct! (Pulls a folded paper from her breeches pocket) Here is a list of the captain I serve under, the men I work with, and all our ports of call.

Troubadour: Really?!? (Unfolds the paper. It is blank.)

Princess: No, not really! I used to be stupid, remember? (Drains the rest of her tankard and wipes her mouth on her sleeve) Now, if you’ll excuse me, I have a deck to swab. Are we done?

Princess: No problem. Do send my aunt best wishes. And remember, no sappy ballads.

Troubadour: I’ll do my best, Your Highness.

CLICK HERE to purchase a copy of Tales of Arilland in paperback or on Kindle — hardcover coming soon!