Last weekend at the WRW talk, Denny mentioned a meme called “Six Sentence Sunday”, where folks posted six sentences from a work in progress to try and 1.) keep the momentum going and 2.) whet fans appetites.

Also last week, I was tagged by fellow WRW members Meredith Bond and Diana Belchase to particpate in something called “Lucky Seven”, where you post seven sentences starting at line 7 on page 77 of your manuscript.

Well, Saturday’s novel isn’t quite to page 77 yet, but I’ve pulled this section out of ENCHANTED that I think will fit both bills.It’s actually a nice creepy bit about our dear Prince, after he returns from enchantment.

While a frog, he had learned to survive within the constant conversation of the Wood. There it had guided him, reassured him. Here, the whispers shook him to his core. Instinct screamed at him to hide, to pull the sheets over his head and plug his ears. He pretended the strange sounds were simply servants murmuring down the hallway. They were not in the room with him, not mouthless cries from beyond the veil, not long- ago memories soaked in stone and built into the cold, confining walls around him. 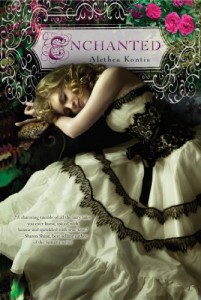