Those chosen few who read Beauty & Dynamite know that back in 2005 I had a cancer scare because of a tiny mass they found during a chest x-ray. We named the “tumor” and made jokes and I was so scared to death by how everyone around me was acting that I pushed up the surgery date just to get it over with. Turned out that it was a congenital birth defect called a bronchogenic cyst.

[Bronchogenic cysts represent 10-20% of congenital cystic diseases of the lung, and account for approximately 10% of mediastinal masses. These cysts are the result of ectopic budding of the tracheobronchial tree during embryologic development from the primitive foregut.]

Far less traumatic–but far more frustrating–has been this nonsense going on with my left foot. I’ve been given a walking cast. I’ve appropriated crutches. Everybody keeps asking me what happened, and all I can say for sure is that “My foot really freaking hurts.” X-rays show that it isn’t broken. Blue Cross Blue Shield almost scared me out of getting an MRI last week to look at what was going on with the soft tissues.

But I’m glad I got the MRI (no matter what the resulting hassle it will be for me), because there would have been no other way to perfectly diagnose this ganglion cyst in my foot.

I’ve just sat here for an hour and done research online. Most of these cysts are huge, occur in the hands and wrists, and present themselves with swagger–in fact, this condition is also called a “Bible cyst” because back in the day people were advised to SMASH IT WITH A LARGE BOOK to break it open…and a Bible was a large book just about everyone had around the house. (FYI–Book Smashing is no longer the recommended treatment.)

So this little cyst is hiding somewhere in the top of my left foot. I never would have guessed there was a sac of liquid in there causing all this nonsense. Here is a picture of my feet. I just had a cortisone shot, so you can see the band-aid over my foot where the cyst is. 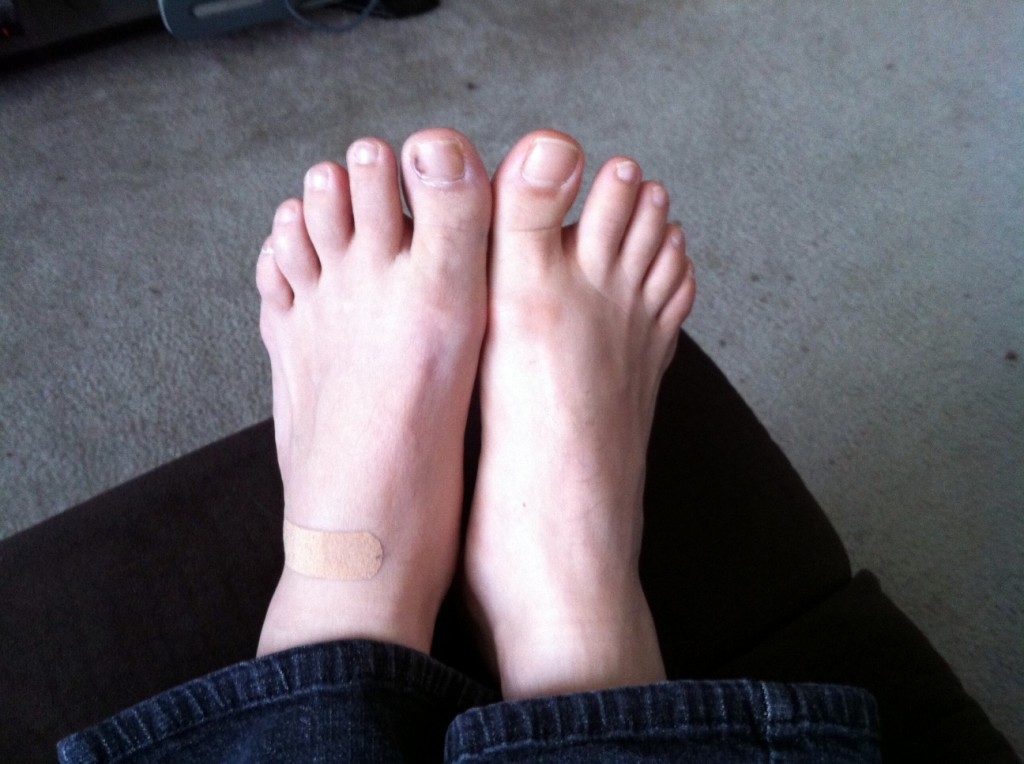 Otherwise, they look just like normal feet, right? (Yeah, yeah, except for that bit where I bruised my left big toe…nothing a little nail polish can’t cure.)

So what the Ninja Cyst is doing in there is 1.) making my middle toes numb and 2.) making the outside of my foot KILL me because all the tendons and muscles over there are compensating for this Ninja in my foot that’s not supposed to be there.

Unfortunately, like most doctory things, there’s no good cure for this Ninja. If it becomes as big as the ones on the internet, the doc can drain it or I can have surgery…but even that’s no guarantee that it won’t come back. Right now, the best we can do is fix my orthotics (I need new padding), wear really great shoes (and by that I mean sneakers and military combat boots…no pretty shoes allowed), and possibly do some physical therapy that includes ultrasound.I took the cortisone shot today because I am in loads of pain, but that was my one and only dose. The rest is up to me.

The up-side is that I don’t *have* to use the walking cast or the crutches unless I’m in boatloads of pain again. I’m also allowed to go back to the gym (THANK THE GODS), but only for biking and rowing. No elliptical machine for a while.

With any luck, the Ninja Cyst will either develop superpowers or just get smaller and go away. With further trauma (like Dragon*Con) it may come back, but by then I’ll know how to deal with it.

And, if all else fails, there’s always SMASHING IT WITH A BOOK.

One thought on “SMASH IT WITH A BOOK”