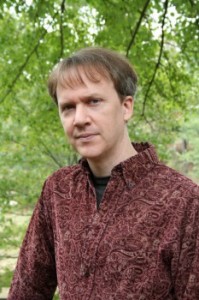 I’m not quite sure at what point I fell in love with Howard A. Jones’s novel The Desert of Souls

–I could open the book to find out, but then I’d get stuck reading it all the way to the end again, and my schedule will not allow it! Suffice it to say, it was somewhere in the first two pages.

In fact, I enjoyed it so much that I wanted to read all of 1001 Arabian Nights and watch The Fall over again (which Howard has apparently not seen and desperately needs to remedy), and I fell all over myself writing one of the most useless, fangirl-squeeish reviews I’ve ever written for Orson Scott Card’s Intergalactic Medicine Show. Happily, the staff there do realize I’m both a girl and a geek, and they allow me my moments.

Since I was hosting a Month of Writers anyway, I took the opportunity to ask Howard a few questions above and beyond the basic interview-questionnaire for this month. (Because I’m the Princess, that’s why!) Please enjoy.

Alethea Kontis: Are there storytellers in your family?
Howard Jones: My father studied stories and taught them for years as a university prof and wanted to write, but didn’t pursue it very often. My eldest sister loves to write just as much as I do.

AK: What do you think are the most important elements of storytelling?
HJ: Interesting, motivated characters going to interesting places for interesting reasons. Forward momentum. Tension, surprise, and satisfying character and story arcs. Oh, and lots more stuff!

AK: What inspired your passion for 1001 Arabian Nights?
HJ: The Nights themselves, but I would never have explored them if I hadn’t read Neil Gaiman’s issue #50 of Sandman set in ancient Baghdad, Ramadan.

AK: What is your favorite tale, fairy tale, or fable?
HJ: I used to love the Greek myths, especially the stories of Theseus and Heracles. As much as I love sword-and-sorcery and historical fiction, my very favorite (and very short) story is probably Sredni Vashtar, by Saki (H.H. Munro), which is just as brilliant as I remember it every time I sit down to read it. Apart from that, I sure love all kinds of stories by Robert E. Howard, Harold Lamb, and Leigh Brackett, which I revisit with some regularity, along with work from Fritz Leiber. And I love many tales from the 1001 Nights, but some moments from the Shahnameh impressed me even more, particularly the cycle about Rustam.

AK: What kind of novels do you like to read?
HJ: I like a wide gamut of stories in different genres, but I suppose most of them are some flavor of adventure story with traditional storytelling conventions. I’ve read some interesting experimental work, but little of it really resonates with me. I prefer stand-alones to long stories split over multiple large books, though I do like continuing characters.

AK: What are you working on now?
HJ: I’m still tweaking the sequel to The Desert of Souls, trying to heighten the storytelling aspects and deepen some of the new characters. I SHOULD be working on the Dabir and Asim short story collection I hope will follow, but it’s not quite time to let go of this story yet.

AK: Travel the World or Travel Outer Space?
HJ: Too tough to call. I want both.

AK: Music or silence (while you write)?
HJ: Silence.

AK: What weird foods do you like?
HJ: I guess some people would say sushi or Indian food or Thai is weird. I love all three.

AK: Will you be watching the Royal Wedding? Why or why not?
HJ: No. I’m not remotely interested. Rich people I don’t know get married all the time.

AK: How many novels/short stories/screenplays/poems/etc have you published?
HJ: 2 novels. I’m not sure how many short stories. A couple of dozen, probably, and one or two sonnets.

AK: How much do you write every day?
HJ: I’m in edit/revision mode right now, so it’s hard to tell. When I’m in rough draft I try to get at least 2 k, although I try to be happier with less, because 1 k of good words is a heckuva lot better than 5k of bad words.

AK: How much do you WISH you could write every day?
HJ: Five thousand words!

AK: If you could write like one author, who would it be?
HJ: I think Chris Willrich has amazing style and lyricism, and Scott Oden has wonderful narrative drive and fabulous action chops. Can I take a little from each, or get the world building know-how from Leigh Brackett and Jack Vance?

AK: If you could be one superhero, or have one superpower, who/what would it be?
HJ: I’d love to have Wolverine’s regenerative ability so I’d age slowly and heal rapidly.

AK: What’s the coolest thing you’re about to do?
HJ: Get paid to write more novels!

Howard Andrew Jones is the author of The Desert of Souls (Thomas Dunne Books 2011, read Alethea’s gushing review of it here), a historical fantasy set in the 8th century Abbasid caliphate featuring  Dabir and Asim, characters who’ve  appeared in a variety of short fiction venues since 2000, and the author of a Pathfinder novel, Plague of Shadows, released in March of 2011.

Jones was the driving force behind the rebirth of interest in Harold Lamb’s historical fiction, and has assembled and edited 8 collections of Lamb’s work for the University of Nebraska Press. He has served as Managing Editor of Black Gate magazine since 2004.

When not helping run his small family farm or spending time with his amazing wife and children, he can be found hunched over his laptop or notebook, mumbling about flashing swords and doom-haunted towers. He’s worked variously as a TV cameraman, a book editor, a recycling consultant, and most recently, as a writing instructor at a mid-western college.