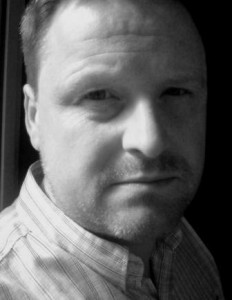 While today’s Month of Writers victim and I have never met in person (at least…I don’t *think* we’ve ever met in person, and if we have, then Gareth is free to blatantly trip me the next time he sees me), he and I still seem to swap a lot of chat on Twitter in the wee hours of the Eastern Time Zone, when he’s been up for hours in Bristol.

Twitter is lovely for that sort of thing. So is having lots of friends in the UK. And now he can be your friend too! How much do you have in common? You won’t know until you read this…

Coffee or Tea?
GP: I gave up caffeine about twelve years ago and my productivity soared.

Travel the World or Travel Outer Space?
GP: Outer space. Otherwise instead of a sci-fi author I’d be a travel writer.

Fantasy or Science Fiction?
GP: Science fiction, definitely. I can’t seem to suspend my disbelief hard enough for most fantasy.

Music or Silence (while you write)?
GP: I often listen to instrumental music while I write. I find songs with lyrics too distracting. Film soundtracks can be especially good. I often use the soundtracks to Blade Runner and
Moon.

What weird food do you like?
GP: Chili con carne sandwiches.

Will you be watching the Royal Wedding? Why or why not?
GP: I watched the wedding, but I recorded it so I could fast forward through all the boring bits. That cut the whole thing down to about ten minutes.

How much do you write every day?
GP: I judge my daily output in terms of quality rather than quantity. I am happy if I write one good sentence.

What are you working on now?
GP: I am currently working on a sequel to The Recollection (Solaris Books, Sept 2011), plus a number of short story ideas.

If you could be one superhero, or have one superpower, who/what would it be?
GP: I would love to be able to fly. So flight, really. Or invulnerability. Invulnerability would be cool. Either that or being able to make people’s heads explode.

***************************************
Gareth L. Powell is the author of the novels The Recollection and Silversands, and the acclaimed short story collection The Last Reef. He is a regular contributor to Interzone and his work has appeared in a number of recent anthologies. Gareth has given guest lectures on creative writing at Bath Spa University; and has written a series of non-fiction articles on science fiction for The Irish Times. He can be found online at http://www.garethlpowell.com.