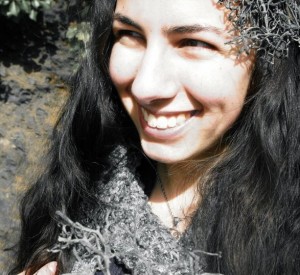 I had never met Amal El-Mohtar before last weekend. She and Aliette de Boddard kindly offered to let me crash in their room Thursday night (as I had a workshop first thing Friday morning), so I offered to pick them up at the airport. As no geek worth her salt would pick up someone at the airport blind,  I friended Amal on Facebook. My first reaction on seeing her picture was: “My God! She’s gorgeous!”

The FairyGoddaughters make fun of me all the time, because I apparently think everyone is “cute” or “gorgeous.” Who’s to say I’m wrong? But as the weekend went on and I got to know her better, I think what I saw in Amal was something I recognized in myself: the ability–no matter what time of day or night–to bring The Shiny.

Perhaps it is some elusive thing born to those of us who share that rare chemistry of Mediterranean and Canadian heritage. Perhaps we were born under the same star…or under the same Hill. For whatever reason, I was fascinated by this other soul so full of sunshine and smiles. Here is your chance to be fascinated by her too.

Or…to at least watch her go nuts while I force her to make decisions.

Mac or PC?
PC — for now. I am tentatively leaning towards having my next laptop be a Mac, for lo, I am not partisan about such things. I’ve also been recently made aware that my feeling that I am Not Clever Enough for a Mac is probably bullshit and I should kick it to the curb.

Coffee or Tea?
Tea, unless I am called upon to be a hummingbird and/or an annoyance/spectacle to all around me, in which case, coffee.

Travel the World or Travel Outer Space?
Stupid binaries! I’m going to say that the World ought to contain Outer Space and say that if the Doctor can travel through both then so can freakin’ I.

Fantasy or Science Fiction?
Binariiiies! Fantasy, mostly. I’m more often drawn to it and I more often write it, but I’m looking forward to branching out.

Music or Silence (while you write)?
Both. It depends on what’s being written when. Often I’ll alternate music and silence within writing the same piece, because I’ve gotten tired of one or the other.

What weird food do you like?
Weird is such a relative word! I mean comfort food to me is dried yoghurt spread over pita bread with a drizzle of olive oil and a sprinkle of mint, sumac, thyme, and sesame seeds. I d’know, is that weird? I suppose brains are weird. I have enjoyed eating sheep brains, but only the once. And they were fried in garlic and coriander, which cannot help but make everything delicious.

What is one of your most irrational fears?
Daddy Long Legs. I know they’re harmless. I know. But they are too spindly and have the wrong number of legs to be spiders. Spiders are awesome and don’t activate my lizardbrain flight/smush instincts. Daddy Long Legs… Augh.

Also I recently learned that leeches can climb doors, which means my terror of them is COMPLETELY RATIONAL. Just in case anyone thought otherwise.

Did you watch the Royal Wedding? Why or why not?
I did, because my housemate and his friend sat down in front of the TV at 10:00 AM while I was trying to work on a thesis chapter, opened a bottle of port, and began a stream of pithy commentary whilst imbibing said port. I couldn’t help but sneak in to take part in wryly enjoying the deconstruction of spectacle.

…I think I may have just said I enjoyed it ironically. Shit.

How many novels/short stories/screenplays/poems/etc have you published?
0 novels, 10 short stories, 0 screenplays, 1 collection of short-short stories and poems, 22 poems.

How much do you write every day?
Not enough. Except while I was writing The Honey Month, where every day for 28 days I completed a piece of short fiction or a poem. That felt frankly wonderful.

How much do you WISH you could write every day?
Enough to make it my day job.

What are you working on now?
Two poems and several short stories which either need writing or revising; featured are grief-sucking throat-leeches, men with hollow backs and the witches who stuff them, Damascene rulers, footnotes, sentient diamond oceans, and ambiguously gendered gardeners.

If you could write like one author, who would it be?
Though I am in constant awe of the work of authors I admire, I don’t ever really think “I wish I could write like this person.” I have often thought “I wish I had written this amazing freakin’ book,” while recognizing that it would have been a very different book had I written it, making the point moot. I would like, I suppose, to write like my very best writerly self.

If you could be one superhero, or have one superpower, who/what would it be?
Storm was always my favourite X-Man. Elemental control really appeals to me — but then so do telepathy and telekinesis. I suppose to make an informed decision you’d have to tell me what kind of world I’d be inhabiting. I would deeply love to be a wandering water-bender from Avatar: the Last Airbender. The show, obviously, not the film.

What’s the coolest thing you’ve ever done?
The COOLEST? These questions are unpossible! I rate very highly the climbing of the Glastonbury Tor at night in order to sit and tell spontaneous stories with Jessica Wick and Oliver Hunter while passing around a bottle of Elderflower wine.

What’s the coolest thing you’re about to do?
Perform a D&D parody of “Like a G6” (“Roll a D6”) at Wiscon’s Karaoke night with Ben Rosenbaum and David Moles.

Name three things on your List of Things to Do Before You Die.
1) Finish my PhD
2) Write a novel
3) Get it published

A Canadian-born child of the Mediterranean, Amal is currently pursuing a PhD in English at the Cornwall campus of the University of Exeter, sharpening her quills for the hunt. In her hours of rest, she lives in a house on a Hill’s Head, where she drinks tea, plays harp, tastes honey, and writes stories about the Arabic alphabet, book-women, singing fish, and Damascene dream-crafters. Not usually all at once. “The Green Book” was nominated for the 2011 Nebula Award.