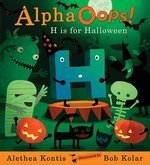 In case anyone didn’t see my horribly squee-ish Tweet about it this morning, or feel the true intensity of said squee, I will bring the cause to your attention here now.  Mostly because my mom’s not on Twitter or Facebook, but she checks my blog.

Hey, Mom! *waves* GUESS WHAT?!? I got reviewed in the New York Times Sunday Book Review. (It’s sort of a big deal. Trust me.) They said I was fine and beautiful and cheerful. (Okay, they said that AlphaOops: H is for Halloween

This sequel to “AlphaOops! The Day Z Went First” makes a fine Halloween book for early readers, though for some the alphabet-soup concept won’t speed up the process. Backstage, the big letters (looking beautifully lighted from within, in digitally created art) argue about who should go on first. “A,” not ready, insists, “H has top billing, make her go first.” Many Zombies, Goblins and Devils later, all cheerfully mixed up, small pumpkin letters line up neatly below, in order at last.

One thought on “For Those About to Squee, I Salute You”