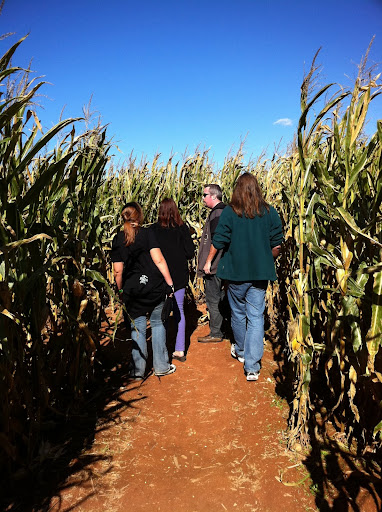 Our favorite Canadian was down for a brief visit, so yesterday we took him to experience one of our great American autumnal past times — a giant corn maze.

The 2010 Temple Hall Fall Festival and Corn Maize is right around the corner here in Leesburg. (It runs right up until Halloween, for those interested.) There are hayrides, camel rides, corn cannons, and a cow train. There’s a 24-acre corn “maize”, and an area they called “the jumping pillows” which was like a giant trampoline that kids and adults alike were free to enjoy!

The piece de resistance — the pumpkin cannons. Launch a pumpkin 100 yards through the air with our new Pumpkin Blasters! These new features at the farm are essentially big artillery pieces (safe for all ages) that load and fire pumpkin at long range targets. The cannons were a little tetchy at times, but far too much fun to pass up. It brought me back to that Fourth of July when Dad made the potato cannon we shot at the British flag-adorned floatee in the lake.

Dad would have been impressed — these cannons were pretty darned powerful and not too bad with accuracy. If you would like to see a demonstration of the Princess firing said cannon, click here to get a taste on YouTube. (I’m not a bad shot!)

We couldn’t have ordered up a better day. Of course, if I had a rewind button I would have left our camera at home, instead of risking its loss in the short walk from the parking lot to the camel pen. I curse the selfish person who picked it up and took it home, if such a person exists. I also curse myself for not taking Drew & Laura’s wedding pictures off the second we got back from NC last weekend. I’m so sorry, guys. It really was a lovely do. *sigh* The camera is just a camera. The memories are harder to let go of.

Thanks to 21st Century technology, we all still had our phones and snapped quite a few shots of this gorgeous day. Click here to see the album.

I hope you’re all having similarly fabulous fall weather! Enjoy the season!