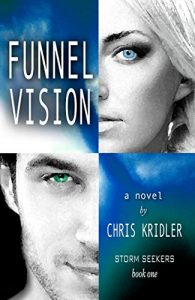 Over on Patreon, Sarah and I run a feature every week called #FriendlyFriday, where we tell you all about my fabulous friends and what brilliant things that they are up to!
Since I am gearing up for my Storm Chaser Apprenticeship, I thought I should take a moment to tell you a little bit about the woman who helped inspire it: Chris Kridler! Chris is the author of the novels Funnel Vision, Tornado Pinball, and Zap Bang.

“Most chasers have a great reverence for the sky and a scientific interest in the weather, even if they aren’t scientists. As a photographer, I find storms challenging and enthralling. I don’t chase them to face death.” — Chris Kridler

Each Spring she heads for the middle of the US–Tornado Alley–to record and photograph some of the deadliest storms in our country. And this year I am riding shotgun!
Besides taking some breathtaking photos of these storms, Chris records all the data that comes along with them.  From precipitation to temperatures, the recorded information is used by scientists and storm chasers to help track down Plains supercells and tornadoes, Florida storms and tropical weather (hurricanes).
She has been on hand for some of the worst storms in the last 20 years, including the EF3 (initially reported EF5) tornado at El Reno, Oklahoma in 2013, which was the widest ever recorded at 2.6 miles and took the lives of three well-respected storm chasers and at least 17 others. She will be the first person to tell you how dangerous storm chasing can be, but also how necessary it is for us to record and understand them. 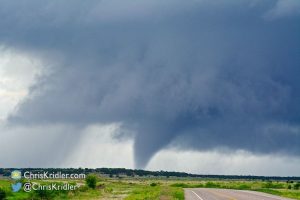 “I would hate to see an end to storm chasing. Even though it’s a hobby for me, as well as a professional interest in terms of photography, it’s also been important to weather reporting, research and warnings over the decades. I’m not going to pretend that all storm chasers are virtuous life savers, because most of them aren’t. But most are good people who are happy to share what they know and respect the weather and others – who, like me, enjoy the beauty of the Plains, the challenge of forecasting, and the pleasures of traveling through middle America with friends. I fell in love with chasing when I took a storm tour in 1997. Since then, I’ve chased with friends or on my own all over Tornado Alley and beyond. I’ve given presentations about it. I’ve satirized it in novels. I’ve taken photographs I couldn’t get any other way. And I wouldn’t trade a minute of it, except for the moment when I learned that Tim Samaras and his crew were killed.

Friday was a terrible day, but I still want to see more storms. They are the only impartial and unstoppable forces in this drama, and they will still spin across the Plains, beautiful and dangerous, whether or not there are witnesses.” — Chris Kridler, on El Reno

I’ve ordered my special Storm Chaser tiara (more on that later!) and my #OzorBust t-shirt, I’m almost ready to hit the road with Chris! I hope you’ll follow along at home as we head out on our adventure this May. I can’t wait to see what the sky holds in store for us!
xox
Princess Alethea
*****************

Remember: My Patrons will be receiving an ALL ACCESS PASS to Alethea’s Official Storm Chaser Diary and Pics! Become a Patron of the Princess today! Pledging as little as $1 a month gets you exclusive access!