So…guess what I’m doing this summer?

Why, I’ll be gone with the wind, my darlings. More specifically…I AM OFF TO BE AN APPRENTICE STORM CHASER.

Storms have fascinated me ever since we studied the different cloud forms in elementary Earth Science. They were a sizable element of my studies when I was on track to be a Marine Chemist, back in college. Twister was fascinating to me…mostly on an incredibly geeky scientific level.

So when my friend—author, photographer, and Master Storm Chaser Chris Kridler made an offhand remark last year about how I “should go chasing with her sometime,” I made sure she didn’t forget it. She said, if I was serious, I should block out the entire month of May. 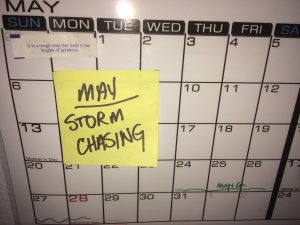 I’m pretty sure she didn’t think I was serious.

Chris (http://skydiary.com/) has 20+ years of storm chasing experience. I began calling myself her “Storm Chaser Apprentice,” which made her chuckle. (Expect that t-shirt to be made available on Amazon soon.)

But I want to be clear—I am not a risk taker. I am doing this for the science, and the experience. “Amateur Storm Chasers” are those yahoos that hear about a weather report and hop in the car armed with their phone and ZERO scientific equipment. I had a boyfriend convince me to take a ride like that once. ONCE. Driving blind into threatening cloud formations scared me half to death. Because IT IS A STUPID THING TO DO. DO NOT DO THIS THING.

I knew that if I ever went Storm Chasing again, I would do it right.

So here we are, on the cusp of May, and I am officially your Storm Chaser Princess of 2018, reporting for duty!

In the weeks to come, I’ll be posting all about my prep for storm chasing: everything from packing (t-shirts are so important!) to playlists and cameras and Trip Goals, to test runs, info about Chris, and advice she imparts to me as we gear up for the road.

I’ve been saving up money to cover food, gas, and hotels—if you’d like to throw a few bucks my way to help with any of this (or the occasional Starbucks), you can PayPal akontis at gmail or click the Donate button on the right.

If you’d like an All Access Pass to my daily Storm Chasing Diary and all my photos, go over to Patreon and become an official Patron of the Princess! Even a pledge of just $1 a month will grant you access!

If you can’t afford Patreon but still want to follow along, worry not—I’ll be posting some updates here and there, and on social media (FB Live is still a pretty great feature). I’ll definitely be making the occasional appearance in Chris’s photos and blogs. (You should bookmark her site  anyway, because TRUST ME…her photos are SO AMAZING.)

Plus, over on http://skydiary.com/tracking , you will be able to check in on us at any point when we’re on the road to see exactly where in the US we are at any given time! (More details on that later.)

As each day passes, I’m getting more and more excited. I’m looking forward to riding Shotgun with the Master…and having my Patrons right there with me in the front seat!

Chris says that Storm Chasing usually begins around second week in May, but she’ll be watching the skies. As soon as everything feels right, I get the call and we hit the road!

OMG I AM SO EXCITED YOU GUYS. Seriously. I want to start packing, like, now. And at this point in my career, I pretty much hate packing.

But I have to be ready to go. Because in May…THE CHASE IS ON!