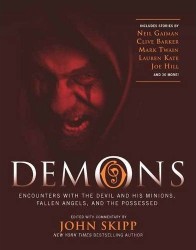 Anyone who’s ever edited an anthology knows: there is a method to the madness. Some philosophies differ, but the two most important stories in an anthology are 1.) the opener and 2.) the closer. You want to start strong…and possibly end stronger.

Yes, even in literature, it’s fine if you want to eat dessert first.

. It was (and still is!) an amazingly diverse anthology, filled with tales ranging from heartbreakingly sweet to positively gory (mine was one of the former). The incredibly impressive table of contents started out with Angela Carter and ended with…ME, closing the book out directly after Neil Gaiman.

It was a move that honored me right down to my toes, and one for which I will always love and cherish John Skipp. (In fact, I gushed about it quite a bit in this essay here.)

So late last year, when Skipp sent around another hush-hush email saying that he was looking for stories for another anthology — one about demons this time — I immediately said yes, as I had promised. And then an even more amazing thing happened: I had an epiphany.

I had been toying around with a story line for quite some time…decades, even…one involving Snow White and a Unicorn Hunter. For only Snow White knows what happened to her in the forest between the time the huntsman left her to die and the time she found the dwarves’ cottage. And really, who *better* to use as a lure for hunting unicorns than the purest, fairest princess in the land? But there was something missing, and I didn’t know what…until I got Skipp’s email. The moment I read the word “demon,” I knew exactly where she got those iron shoes — you know, the ones she made her evil mother dance in at her wedding.

So in four days I sat down and wrote the most amazing story I think I’ve ever written to date. I laughed; I cried; I didn’t want to let it go. It was one of the first three stories accepted into the anthology (I think Adam and Neil were the other two). I was so incredibly excited about it and couldn’t wait to share it with the world…only it was a secret and I couldn’t tell anyone!

Well, it’s not a secret anymore. John Skipp has officially announced the table of contents, and you can officially preorder Demons: Encounters with the Devil and His Minions, Fallen Angels, and the Possessed

(nice title, eh?) off of Amazon already. Please notice that this time Neil and I have switched places there at the end, just to mix it up a bit for you.

Oh…I wish October would hurry up and get here. I can’t wait for you to meet my princess!