It was all the rage in high school: South Carolina Governor’s School for the Arts. As a junior or senior you could audition for their summer program in one discipline: visual art, ballet, drama, singing, writing…there may have been others, but two of those defined who I was. There was only one problem. I had to choose between them.

My junior year, I tried out for drama because Casey was trying out for drama. It was an easy in–after all, I’d already been a TV star. I got my monologues together and had them down pat. Mom and I spent countless hours trying to find the best piece for me to sing — Mom’s favorite was “I Enjoy Being a Girl” from Flower Drum Song, but I ended up settling on a section from Diana’s “Nothing” in A Chorus Line. I remember the looks on their faces when I opened my mouth and belted out that song: actual, literal, astonishment. Simon Cowell had that same look on his face when Susan Boyle opened her mouth.

Casey got in. Even Julie Gottlieb, who could do no wrong, waltzed straight in to her audition in a baggy shirt and jeans and got in. But not me. We all got over our astonishment eventually. I spent the summer writing ridiculously long letters to Casey and sealing them with crayon wax.

My senior year, I tried out for writing. My friends Chris McCormick and Michelle Detorie did too. Now, I’d been writing for just as long as I’d been acting — and more regularly — so this was an even easier in. For the audition piece you could submit ten poems, three short stories, or a section from a novel-in-progress no longer than ten pages. I had all of those but I chose the third. I had the perfect piece–the climax of The Golden Band–where Cricket uses her powers to fulfill the prophecy and put the broken world back together. It had tension and emotion and poetry and everything. It was perfect. So we submitted these pieces with our application. On the day of the “audition” we attended a classroom lecture about writing, and then spoke to the judges after the class.

I knew I wasn’t going to get in after the first five minutes, when the lecturer wrote “SLICE OF LIFE” on the chalkboard. I have an issue with “slice of life” writing. Mainly, I hate it. I never liked reading books where the protagonist is sitting on the front steps contemplating suicide because she’s just started her period and her parents are getting divorced. That’s not my life. My parents have been married my entire existence. They travel the world and have hotels full of people wave goodbye to them with white cloth napkins. They make friends with strangers on airplanes and get invited to weddings at the Vatican. They’ve always brought home trinkets and stories of magic and wonder to go with them. We lived in a giant brick house on a lake that my friends still visit in their dreams. We had wonderful adventures there. This was my life. No matter how you sliced it, it didn’t have depressing crap crawling under the surface like maggots. And even if it did, I wouldn’t tell stories about stuff like that. Telling stories about horrible things just makes horrible things immortal. You tell stories about wonderful things. That’s just the way of the world.

Unfortunately, it’s not the way of Governor’s School. I suffered through the class and waited my turn to finally sit with the judges. It wasn’t much of a conversation. They flipped through the pages of my manuscript, looked down their noses at me and asked, “Is this indicative of all you write?”

That night, Michelle called me on the phone–which was a surprise, because we hadn’t really talked that much before. She was so scared about what had happened that day. She just knew she wouldn’t be getting in, and she begged me to give her my acceptance when it came. I calmed her down and told her to be patient. The letters hadn’t even been mailed yet. She could still get in.

Chris and Michelle both ended up getting accepted. I lit a candle and burned my rejection letter from Dr. Virginia Uldrick to ashes in the backyard. The family went to Greece that summer.

Yesterday, I received texts from both the Fairy GodBoyfriend and Leanna Hieber with pictures of John Skipp’s Werewolves and Shape Shifters

anthology — it’s on tables at B&N all over the country, apparently (look for it!). As a gift, FGB purchased a copy for me. It was lying on the bed when I got home. It’s a gorgeous book, chunky and beautiful and heavy, with illustrations for every story. For a while I just petted it. (Pick it up at the bookstore. You’ll see what I mean.) And then I flipped it open.

There are thirty-five stories in the book, and I’m the last one. The anchor story to Angela Carter’s entre, right after Chuck Palahniuk and Neil Gaiman (talk about a dream come true). Skipp didn’t tell me what he’d written for my introduction, so it was a surprise when I got there.

“And so, at last, we come to the end of our journey, returning to the woods where it all began. And it is here, amongst the beasts and forest-songs, that I leave you in the lush and lovely company of Alethea Kontis’s ‘Sweetheart Come.'” Skipp goes on to explain a bit about how he fell in love with the story and stole it straight from the Nick Cave anthology Up Jumped the Devil (with permission, of course). “I can think of no better, more beautiful way to bring this book to a close.” And then my first line after that simply bites with clever juxtaposition: “Sasha was fourteen when the villagers threw her to the wolves.”

I couldn’t help myself. I started reading. I read about what happened to Sasha, and her daughter, and her daughter’s daughter, and the birth of the great-great grandson whose adventures begin this particular legend. From his strange and magical family he learned how to tell the difference between good mushrooms and bad, how to play a variety of instruments (but he was best at the violin), and how to sing the sun down from the sky. It is the same farewell song every night, and it is included right there in the story.

Now, these are not lyrics from “Sweetheart Come” — Doug and Kyle were very specific that we be inspired by Nick Cave but not infringe on copyright in any way, shape or form. If you’re familiar with the song, just think of it as a soundtrack to this story. There are several violin solos in the song — close your eyes and you’ll see Bane, playing with all his heart. All the songs published in this story, all the poetry, they are mine. And the minute I read over that first poem, my eyes filled with tears. This is me. Songs and magic and tales told of adventures long ago. These are all mine. This is who I am.

Yes, Virginia. This is indicative of all I write. Sorry it wasn’t your cup of tea. 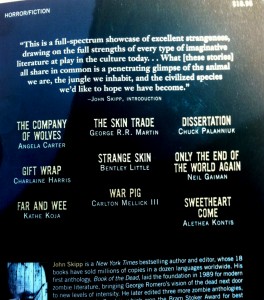