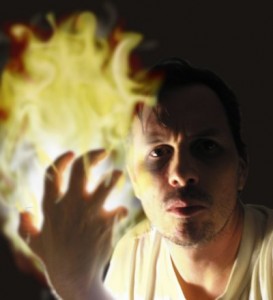 Be sure to stop by Tony’s site after this, on which he’s releasing, chapter-by-chapter, a superhero novel. (Which means, of course, that he can’t pick a favorite in the superpower question… I love being a geek.)

According to this picture (that I want to steal), it looks like he has a few superpowers already. Perhaps Luc and Heather and I might recruit him into our League of Unextraordinary Gentlepersons…

Alethea Kontis: Mac or PC?
Tony Frazier: I use a PC, although I’m seriously considering getting off the Microsoft train. I haven’t used a Mac since the original all-in-one-model I bought in 1985.

AK: Fantasy or Science Fiction?
TF: Space Opera and superheroes, which straddle the uncomfortable space in between. Fantasy in science fiction drag, if you will.

AK: Music or Silence (while you write)?
TF: Usually silence. When I wrote screenplays, which are all image and action, I wrote to music. But writing prose fiction, where I have to get into the heads of my characters, I seem to need it quiet.

AK: What weird food do you like?
TF: My time in Korea gave me an inordinate fondness for kimchi. I seriously love the stuff. Haven’t had it in years, though. Must remember to buy it again.

AK: How many novels/short stories/screenplays/poems/etc have you published?
TF: I’ve had four short stories published. And I’ve put out two novels on my own–one through a vanity press and one an epub.

AK: How much do you write every day?
TF: It varies with my day job. Because I have weekly blog features, I have to keep my output pretty high, but that often crowds out other writing, like short stories or new novel projects.

AK: How much do you WISH you could write every day?
TF: Enough to put out two or three chapters a week instead of one.

AK: What are you working on now?
TF: I’m serializing Hero Go Home, a superhero novel featuring Digger, the star of three of my four published short stories. And I’m getting ready to put out an epub anthology reprinting the Digger stories with some new material.

AK: If you could write like one author, who would it be?
TF: Donald Westlake. He could switch gears between noir and comedy like nobody’s business.

AK: If you could be one superhero, or have one superpower, who/what would it be?
TF: This should be a natural for me, since I’m all about the superheroes, but I can’t pick just one. And knowing me, as soon I picked Flight, say, then I’d immediately wish I had picked Telepathy or Invisibility or something. As soon as you pick one, you realize there’s something cool about all of them in different ways.

AK: What’s the coolest thing you’ve ever done?
TF: I opened a show for Bob Hope once (okay, it was my high school choir, but I had a featured duet). Bob Hope was a famous comedian, kids.

AK: Name three things on your List of Things to Do Before You Die.
TF: I’d like to tour Asia. I’ve spent some time in Korea and would like to go back, but would also like to see Japan, China, Singapore, Thailand, India. I’d like to take my daughter to Disneyland before she’s too old. And I’d like to visit the set of a Digger movie in production.

Tony Frazier’s fiction has appeared in Baen’s Universe, Strange Horizons, and Daikaiju! 3: Giant Monsters vs. the World. He can currently be found on www.herogohome.com, where each week he holds forth on movies and comic books and features a new chapter in Hero Go Home, a superhero novel scheduled to conclude in June.