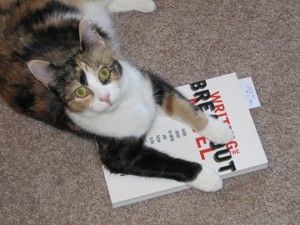 With all these interviews at hand, I believe I shall dub May 2011 my Month of Writers, here on the blog.Be sure to drop by next week–Magical Words Week — when I interview several of the contributors to the Magical Words writing blog.

Today my guest is fellow Codexian and Orson Scott Card Bootcamper, fledgling speculative fiction author Kat Otis. When I asked her for a picture, she sent me what antics her kitten was currently up to. She’s just that quirky.

Alethea Kontis: Mac or PC?
Kat Otis: I started out on PCs, way back in the dark ages, but it’s been Mac all the way since 1992.

AK: Coffee or Tea?
KO: Tea with milk AND sugar.

AK: Music or Silence (while you write)?
KO: Music.

AK: What weird food do you like?
KO: Do Coke Slurpees count as weird?  If not, I’ll go for peanut butter and caro syrup.

AK: What is one of your most irrational fears?
KO: I’m not too proud to admit it – I’m kinda afraid of the dark.

AK: How many novels/short stories/screenplays/poems/etc have you published?
KO: Two

AK: How much do you write every day?
KO: Varies, anywhere from nothing to 10K if I’m really on a roll.

AK: How much do you WISH you could write every day?
KO: It’d be nice to get a consistent 3K/day, plus editing.

AK: What are you working on now?
KO: Edits on a novel-length expansion of my first published novelette.

AK: If you could write like one author, who would it be?
KO: Hmm… tough call… I think I’m going to have to go with Mercedes Lackey.

AK: If you could be one superhero, or have one superpower, who/what would it be?
KO: The power to read/write/speak every language in the universe!

AK: What’s the coolest thing you’ve ever done?
KO: In the spirit of Take-Your-Kids-To-Work-Day, I’ll have to go with my sixth grade Take-Your-Kids-To-Work-Day, in which my dad took me on a tour of D.C.  When we reached the Senate offices, we crashed John Glenn’s private lunch with his wife, Annie, and the four of us hung out talking Navy planes and NASA for half an hour.

AK: What’s the coolest thing you’re about to do?
KO: I’m about to spend two weeks pretending to be a Pony Express Rider and teaching kids about the “Wild West.”

AK: Name three things on your List of Things to Do Before You Die.
KO: Get my Ph.D.; spend the night in a castle; and buy a house with enough space to have a library room, complete with bookcase-lined walls and those cool rolling ladders so you can get to the top shelves.

Kat Otis is a 2009 graduate of Uncle Orson’s Literary Boot Camp.  Her work has appeared in Orson Scott Card’s Intergalactic Medicine Show and Daily Science Fiction (forthcoming). Her driver’s license claims she is a resident of the Commonwealth of Virginia, but as she has lived in four different time zones during the past three years, she is inclined to be skeptical.  You can find her online at www.katotis.com