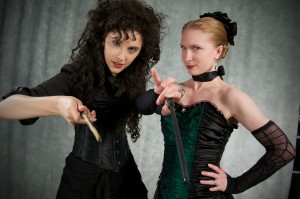 It’s really no secret how much I love Leanna Renee Hieber. She’s my kindred spirit, my bosom companion, the Anne to my Diana…and my Dragon*Con roomie. She just had a book come out this month, and her brand new YA series debuts this November.

And today, she gets to play our little game, too.

So, without further ado… Immobulus!

Coffee or Tea?
Tea (A different tea for whatever series I’m working on. Clove tea for Strangely Beautiful, Earl Grey for Magic Most Foul.

Travel the World or Travel Outer Space?
Both, with The Doctor

Music or Silence (while you write)?
Music (Classical)

Did you watch the Royal Wedding? Why or why not?
No. Because I was too busy dressed up as Narcissa Malfoy at the time. Again, no joke.

How much do you WISH you could write every day?
3 or 4 thousand words would be stellar

What are you working on now?
Back and forth between the last Strangely Beautiful novel and the next Magic Most Foul novel.

If you could write like one author, who would it be?
Edgar Allan Poe during a mind-meld with J. K. Rowling

If you could be one superhero, or have one superpower, who/what would it be?
Flight

What’s the coolest thing you’re about to do?
Continue working on the musical adaptation of The Strangely Beautiful Tale of Miss Percy Parker

Name three things on your List of Things to Do Before You Die.
– Travel the world’s great rivers
– Meet Alan Rickman
– Hit the New York Times Bestseller list with a bunch of my friends listed beside me 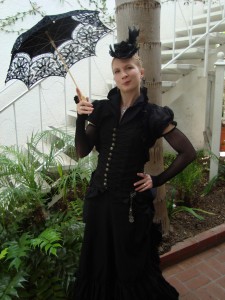 A southern Ohio native with a degree in theatre and a focus in the Victorian Era, the author, actress and playwright got her start in publishing with hot-headed little plays still produced around the country and has adapted 19th century literature for the professional stage. Her “Strangely Beautiful” debut, THE STRANGELY BEAUTIFUL TALE OF MISS PERCY PARKER hit Barnes & Noble’s Bestseller list, was listed as a 2009 favourite on 14 book blogs, won two 2010 Prism Awards and has been optioned for a Broadway musical. Her books have been chosen for Rhapsody and Sci-Fi/Fantasy Book Clubs. Her next series, MAGIC MOST FOUL, a Victorian Paranormal Young Adult series set in 1880s New York City, will hit bookstores November 2011. A proud member of Actors Equity, the Screen Actors Guild and AFTRA, she can be found working on sets for film and television when not on a book deadline. She lives in New York City, happily coupled with her real-life-hero and rescued albino lab rabbit; Persebunny.