A few weeks ago, Joe and I took two rowdy Canadians to see the Adam Ezra Group…a couple of times. By the second event, we were exchanging hugs with the band like we’d known them for years and getting on each other’s Christmas Card lists. Their tour took them from DC down to Florida and Georgia. They swung back up north during their final leg on their way home to Boston, so Joe and I saw them again last night at 8×10 in Baltimore.

It was just like catching up with old buddies–we magically found a parking space and got to the venue early, so we shared hugs with Adam and caught up with Turtle on how Spring Break was and what had been going on in our lives since we’d last (and technically first) met. The news on my part was relatively mundane…I was in the middle of scribbling down my acknowledgments for Sunday, and I’d recently found out that somehow my dear friend Sherri also liked AEG, having discovered them completely separate from me. It’s always fun when that happens.

The set was fabulous, as usual…and though I was disappointed by how few people had shown up on a Thursday night, in a way it was like getting my own private showing. I chatted with complete strangers (they were at my private party, after all) and danced my heart out. The floor at 8×10 apparently has some kind of funky springs underneath it that my knees enjoyed. I sweated my butt off and totally didn’t care.

After their set (and after I stepped outside to cool off and let my hair dry a bit), Joe and I went down to the basement (just like the Basement Song) where the swag table was to chat with Adam and Josh and pick up a CD for Adam to sign to Sherri. I handed Adam the CD and the Sharpie and we talked about my friend who’s this big paranormal romance author, and I spelled her name out, and he signed the cover…and then as soon as he finishes, something in his brain clicked. “Who is this for again? Her full name?”

“I lived in Nashville for almost 12 years. She’s one of my best friends. I wrote the Companion for her Dark-Hunter series. Wait…how do you know her?”

“Last year we got a call from our publicist telling us she was going to use our song ‘Kill Like This’ for one of her book trailers. Was it…Infinity?”

“Yes! Infinity! The young adult book! Holy crap, I had no idea! When I see her at the end of the month, I’m  going to ask her exactly how she and I both fell in love with the same band at the same time. Crazy, right?”

Adam took the CD he had just signed and threw it away. He grabbed another one off the table, opened the shrink wrap, and began to write a small novel that included at least as many expletives as it did exclamation points. I laughed as I read over his shoulder. “Okay, here,” he said when he was done, “and give her this too.” He gave me a huge hug. “Maybe we’ll get to meet her in person some day.”

Adam looked at me for a long moment and shook his head. “God, it’s a small world, isn’t it?”

I agreed. “I guess we were all just destined to meet each other at some point.” 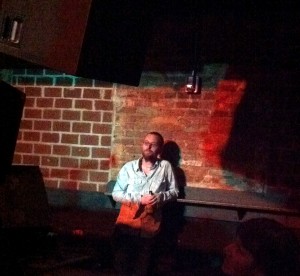 If you haven’t discovered The Adam Ezra Group yet, now’s your chance. They have quite a few more tour dates on their schedule, and since they’re still sort of “underground” at the moment, the venues are still intimate.

If you’re looking up songs to check out on YouTube, I recommend “Half a Hero” because it’s fun to dance to (and should have been on the Kickass soundtrack), “Another Sunshine” because of it’s brilliantly connected lyrics, “Vision” (also fun to dance to), and “Scandal”, which totally belongs on the TV show “Justified.”

Also, if you have five free seconds and are so inclined, click over to the FedEx Underground Music Series site and “become a fan” of Adam Ezra Group — they’re in the running to win a trip to Memphis and a recording contract…and they actually have a shot. Do your part — support indie artists!

And for the Dark-Hunter fans who might have missed it (like me), here’s the Infinity trailer from last May, featuring AEG’s song “Kill Like This.” This is a great example of a successful book trailer — makes me want to go right out and buy the book again. It also holds a special place in my heart for the guy who shows up 19 seconds in. Some of you know him as Bubba, or Evyl Ed. I know him as the only man with a will strong enough to constantly challenge me on Words With Friends, even if I do win 98% of the time. (Love you, Eddie! xox)