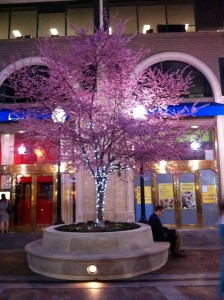 We had a great time with Dickie & Mandy last night. The arrived around 3pm, thus forcing me to stop cleaning and have fun. (Hooray!) We chatted for a while with refreshment, discussing what to do before our 9pm reservations at Hill Country (and the sekrit Adam Ezra performance). Nobody seened to care, so when Joe asked for my vote I didn’t hesitate in recommending Georgetown.

It was the most beautiful day we had all year. 75 degrees with a breeze and fantastic. Traffic wasn’t even that bad. We walked down by the water, back up M street past the crazy line for DC Cupcakes, and then back down to the water again for more refreshment.

There aren’t any leaves on the trees yet, but some of the blossoms are blooming. The Potomac was filled with rowing teams and private crafts and port authority skiffs. The sunset was lovely, and the full moon rose big in the east. And right around 7:30, we headed into the city to find parking before the show. We found a huge garage only three blocks from the restaurant with no problem. There was a huge line at the restaurant…thank goodness for reservations! They let us in early, and gave us choice seating downstairs, right in front of the stage (and the speakers).

It was an amazing show. The food was finger-licking good. Sitting next to the speakers turned out to be a great thing, since many people still felt pressed to try and converse over the music. The band played in three sets with breaks in between, which was awesome, because then there was an opportunity to go check out the swag table and visit the restroom without feeling rude.

The room being what it was, the band just hopped off the stage and came out to mingle with the crowd. I coerced Joe into buying me a shirt (who denies a princess?). He gave me $20 and let me go check out the swag. So I’m looking at the t-shirts, deciding which one I want, and the guy next to me turns aorund and says, “Hey, how are you doing?” And it’s Adam.

“Hey! Thank you SO much for being here,” I started to say.

At which point he just gave me a huge hug. YES, I was a starry-eyes fan girl. Still am. Not ashamed one bit.

I explained to Adam that we’d tried to see him twice before when he came to the area and missed it for one reason or another. And we almost missed him THIS time, since he’s playing in Virginia tomorrow — which we found out about a week after we bought the Enter the Haggis tickets. (The show’s late, though, and close to the house, so we still might try and stop by.) I introduced him to Joe, bought my shirt and had it signed by everyone. All the guys are great. Mandy & Dickie got some CDs and had them signed too. It’s just really hard not to love this band. Especially since their songs are amazing.

For the very last song of the night, Adam and the boys went unplugged and came out into the almost-empty restaurant. Adam sat on a table with his guitar; Turtle grabbed a chair and used the table top like his bongos. And we all sang–of all songs–John Denver’s “Country Roads.”

Mom and Dad probably don’t realize I remember this, but back in Vermont, when I was about four or five, we went to some event where everyone was welcome to sing along. Mom passed around typed pages with all of the song lyrics (which I could read, of course). My favorite song was “Country Roads.” Apart from all those British baby songs my grandmother taught us, “Country Roads” was the very first song I learned how to sing. It still has a special place in my heart. And never before have I seen a band EVER play it live. 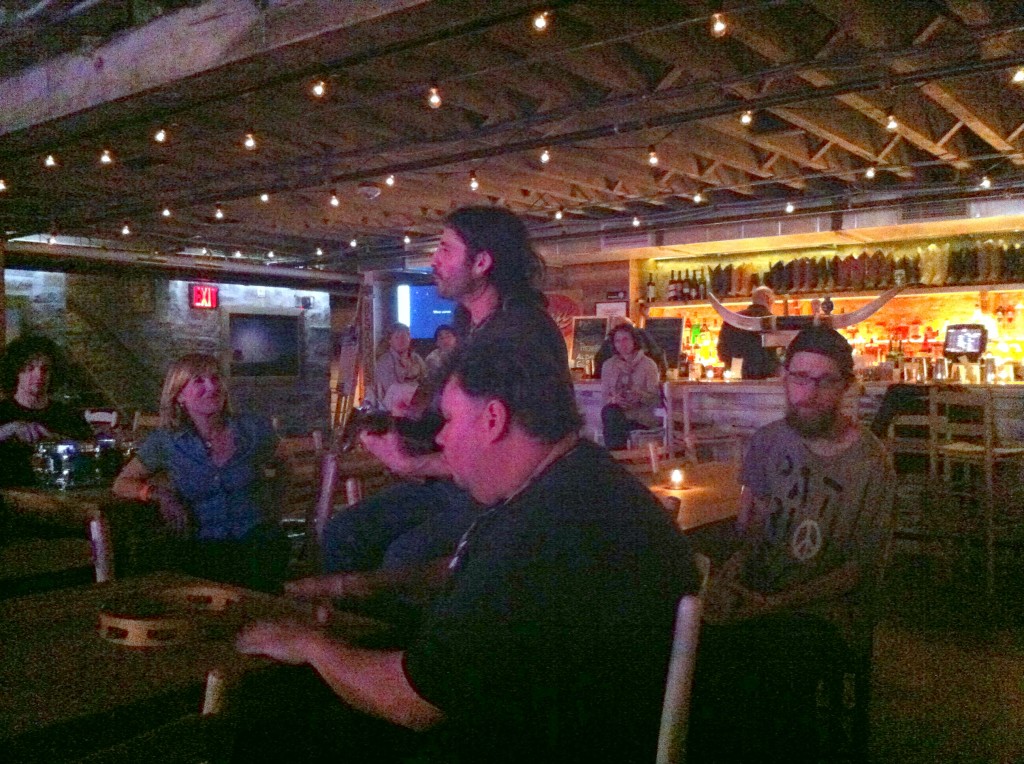 You couldn’t have written a more perfect day. It’s the first time Mandy’s ever been to the states, and I was so glad we could show her a great time. I didn’t even mind driving back home through downtown DC. (The princess is always the designated driver.)

I did mind, however, that the parking garage was closed.

We walked around the block until we found a call box, which Joe used to exchange harsh words with some guy who hung up on him twice before calling us a cab from Falls Church. (Cabbies in metro DC have no idea where Ashburn is.) The verdict? We wouldn’t be able to get the car until 7am, and we had no desire to hang out in downtown DC for six more hours. So we took the cab home. Ugh. (That offer to write a story for someone for $80 is still on the table…just drop me a line.)

It’s always an adventure with me. But it was still an amazing night. And now I’m going to take a nice, long, hot shower and get ready for another one.

What are you all doing this weekend?

(Click on the pictures to see the rest of the “DC with Dickie & Mandy” album. More pics from today & tonight forthcoming…)