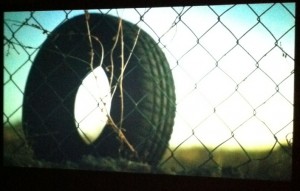 The Fairy GodBoyfriend and I saw the trailer on FIOS’s “On Demand” screen and wondered what the heck it was about, so we ordered it (for far more than it was worth). Apparently we were in a minority–according to the comments left on my Facebook status, a lot of people saw the trailer and thought it was a joke.

It’s real, folks — the film really is about a tire with psychic abilities that goes around blowing things up. Like a true serial killer, the violence escalates: from bottles, to small animals, to people. A young kid (because it’s always the kids who think outside the box) convinces the policeman that the tire did it, at which point the police attempt to track down and apprehend the tire. But how do you catch a tire that doesn’t want to be caught?

The tire does not talk. It does nothing but roll around and tremble with psychic power. And yet, it gives a stellar and believable performance. The whole time, FGB and I kept saying, “This must have been a bitch to shoot.” I haven’t changed my mind about that. I’d be interested in seeing a Makog Of this film…instead of ever seeing the movie again.

There is an element (and why wouldn’t there be?) of surrealism and Theatre of the Absurd in the film, which will only confuse you if I try to explain it, so I won’t. But I’ve seen my share of artists perform at Spoleto. This film had the very same feel. And for the first half(ish), I really enjoyed it. We laughed and hollered and pointed and it was great.

But the ending (forgive the pun) fell flat for me. It made a sort of sense, in the grand scheme of things…and perhaps that’s what was wrong with it. If the theme of the film, presented at the beginning during the policeman’s monologue (a little like the character monologue before Run Lola Run) was really “sometimes things happen for no reason,” then perhaps there should have been a better embracing of that near the end.

Unlike Inception, I can’t tell you how Rubber *should* have ended…I just know I wasn’t satisfied with the one it had. If any of you have some better ideas, I’d love to hear them. This could have been a seriously great movie. Instead, it was a seriously great idea with disappointing follow-through.

4 thoughts on “All Jacked Up & Nowhere to Go”