I finished the edits for SUNDAY last night and sent them in (waaaaay early) to my editor as a Yule gift. I promised the Fairy GodBoyfriend that I’d take it easy today, so there’s going to be a lot of resting, cleaning the house, and watching Christmas movies. I may pop back in here and chat about the edits with you later…but I had to share this first.

I’ve been hearing from folks that SUNDAY was announced in the new issue of Locus Magazine — I kept checking at our local bookstore, but they were taking forever to get it in. (Note to family: subscription of Locus on my birthday wish list. Thanks!) FGB came home last night from work with a copy and I glanced at it quickly and smiled. I didn’t actually LOOK at it until this morning, when I realized that my big fat color picture was right there on top of the page with Toni Morrison and DIANA WYNNE JONES. 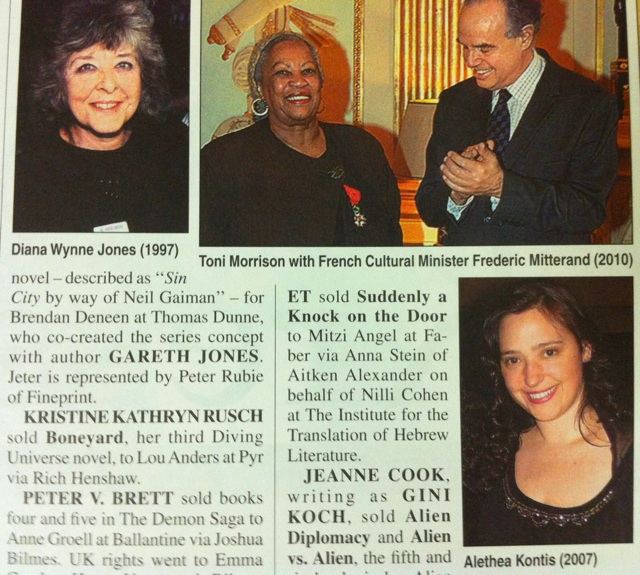 Diana Wynne Jones is without doubt one of my favoritest authors of all time. I listed Howl’s Moving Castle as one of my Top 21 Most Influential Books. Witch Week was the first novel of hers I read, and I’ve had a major obsession with Guy Fawkes Day ever since. (I still mean to actually celebrate Bonfire Night in England one of these years.) She has a way of making a really complicated storyline look so incredibly easy and her characters…my god, what characters they are.

She really was one of the authors who made me the ME I am today, and she is one of the reasons that publishing in YA fantasy has always been my dream. Someday, I want to be the book a lonely eleven-year-old girl gets lost inside. I want to give that gift to others, just like Robin McKinley and Diana Wynne Jones and Tamora Pierce and Meredith Ann Pierce and Susan Cooper and Ellen Raskin and Roald Dahl and Lloyd Alexander gave to me.