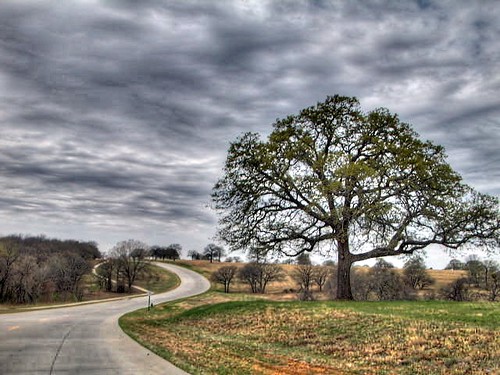 My favorite teacher in high school, Mr. Jon Stafford, taught AP U.S. and European History. I didn’t do very well in history (love kings & queens; hate war & politics), but I looked forward to his class every single day. In addition to our classroom texts, Mr. Stafford had us read Upton Sinclair and Voltaire. He was also a great storyteller himself, and the life lessons I learned from him I carry close to my heart to this day.

One of the most important tidbits (the most important being: “You are the only one who can make you happy“) was about our road of life. He warned us that it would be hilly and winding and sometimes blocked with thorny bushes, but advised that the journey would be rewarding and fulfilling if we chose to make it so.

I listened to Mr. Stafford. I listened enough to completely exempt out of History in college. I listened enough to realize that 1.) I was an optimist of the sort that Voltaire despised, 2.) I was going to decide what made me happy and do that, and 3.) The road was worth traveling, no matter how muddy, murky, and miserable.

I’m one of those people who likes to show up at least five minutes early for everything. Because of that, I normally factor in at least fifteen extra minutes travel time for getting lost…because I usually do. I always get off the interstate one exit before I’m supposed to because I think I’ve gone too far, and I’m so used to missing my turn that it’s really no surprise when I have to go around the block. Of course, once when driving back to Columbia from visiting Casey at college in Clemson, I went the wrong way on I-85 and didn’t realize my mistake until I ended up in Georgia. That’s just how I roll.

Turns out, my life is a lot like that too. In a recent interview at The Qwillery, I talked about how Luc Reid (founder of the Codex Writers) calls me “Backwards Girl” for the strange order in which things constantly happen to me. I’m not quite sure if this is a good thing or a bad thing–essentially, I just jump on every opportunity as it comes and don’t ask questions. I landed a picture book contract with a major publisher without submitting it. I spent the week at Writers of the Future without having won a thing. I was the most popular girl in school when I was nine years old. My very first book presentation was to a standing-room-only auditorium. I got made fun of for hitting the New York Times bestseller list. It’s just how I roll.

I’ve had more than a few book sales and short story sales (the majority of the latter in 2010 alone). Because of that, the sale of Sunday may seem like just another announcement to you. Please let me reassure you that it is by no means “just another” anything. My goal this whole time–even before my Social Studies teacher had me take that make-up test in the back of Mr. Stafford’s classroom and I was so engrossed in his lecture that I knew I had to take that class, no matter what it was–has been to publish young adult fantasy, specifically about princesses.

Fairy tales were my first love, and the obsession from which all my interest in the genres (romance, fantasy, mystery, horror) has sprung. I want to talk to teenagers, misfits like me. I want to share with them the magic and misery of the world. I want to inspire them and remind them that they’re not alone. I want to tell them what I wish I could go back and tell myself at that tumultuous age: Don’t worry so much. Dream as big as you want. Everything’s going to turn out just fine. I want to be their Mr. Stafford.

So how did I get here? This is the question they’re going to ask me now, because I’ve seen enough people ask enough authors. How did you get your first book published? How long did it take you? They ask less out of curiosity and more because they want to follow in the same footsteps. They want Mapquest directions to the magic pill that will make it all happen for them. So here it is–How Alethea Published a Novel in Ten Easy Steps:

Step One: Decide you’re going to be an actress and a writer around the age of eight. Your parents will have kittens, but DO IT ANYWAY. Even if you have to get a chemistry degree to fake them out.

Step Two: Star in a television show before your tenth birthday. It doesn’t have to be anything spectacular; a miniseries on ETV will do. (This meant more back when most people had five channels, and PBS was the only one that came in well.) After high school, when you realize you’re not cut out for LA or NY, make a goal of being published by the time you’re 30.

Step Three: Edit a major SF anthology for Tor. (Major anthologies are the second most difficult thing to publish.)

Step Four: Publish a picture book with a major publisher. (Picture books are the first most difficult thing to publish.)

Step Six: Publish a book of personal essays. Because nothing says SEE? I WAS ALWAYS THIS CRAZY like printing your diary.

Step Seven: Publish a sequel to the picture book. ‘Cause why not?

Step Eight: Get an agent. You’ll need one eventually to do all this work you’re not going to have time to do later.

Step Nine: Start calling yourself “Princess.” If people are going to be calling you names anyway, best to have one already picked out.

Step Ten: SELL THE NOVEL. (Base it on a short story you’ve already sold. It’s like cheating.)

If you follow exactly these ten easy steps, in order, I can guarantee you that in a million years the same thing’s not going to happen to you. (Well, almost guarantee it, because one of you whippersnappers out there will go and prove me wrong now, won’t you? You pesky things.)

Yes, Sunday will be my sixth published book (and if I can sneak another one in before 2012, it’ll be my seventh). But it is the most important book because it is the peak of my journey, the top of the mountain. I can look down from here and see that crazy road I took with its thorns and sinkholes, curving around and crossing back over itself just like Mr. Stafford warned me. Know what else I can see from here? All the other mountains I want to climb and the adventures I want to have in this, the best of all possible worlds. I’ve got my pith helmet and my machete–let’s see where we go from here, shall we?

4 thoughts on “The Adventures of Backwards Girl”