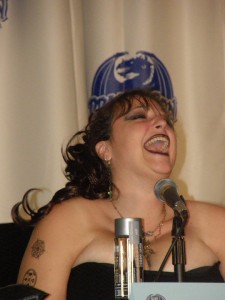 One of the best things about Dragon*Con — I’ve said it before and I’ll say it again — is the whole community of folks that keep it going. It’s constantly amazing how something so large can remain so fluid and consistent without exploding spectacularly into flames.

Since the lovely folks there have been awesome enough to keep inviting me as a guest, every year I learn a little more about the intricacies of the Inner Dragon*Con. This year I donated a few books to the charity auction and signed the infamous Dragon*Con quilt (I was complimented on my signature and artistic skills with a fabric marker). I met a fabulous man who works as a handler for the stars (who imparted to me some of his secret signals) and a fabulous man who worked as an EMT (who imparted to me how to express the Hyatt elevator to the main lobby AND I’LL NEVER TELL). I was on Dragon*Con TV, and I was put in charge by folks in purple lanyards because they had fires to put out elsewhere. I was, happily, never on fire. Go me!

Best of all (though I hesitate to say “best” since the whole Con is just so much damn fun), I got to have a lovely chat with my overworked friend and award-winning author Eugie Foster and spend some time on the office of The Daily Dragon. Staff writer Amy Herring and I cooked up the intro for her “Z is for Zombie” article when we had time to talk at Hypericon in June.

Later, Joe McDermott hooked up with me on Twitter (never underestimate the proper use of a hashtag) and asked for a one-on-one interview. Of course I said yes! He recorded our conversation, which immediately put me into “podcast” mode…reading the transcript over I reailze I could have been a little less blabbermouthy with my answers, but if you love Princess Alethea, this is pretty much as true-to-form as it gets.

Those convenient links for you:

Amy Herring’s “Z is for Zombie”

Joe McDermott’s “Everybody Likes Layered Things! Like Cake! And Interviews with Alethea Kontis!”