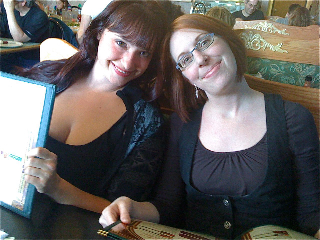 Cherie Priest is a displaced Tennessee Gal–she may live in Seattle now, but she was born & raised in the South, so we still claim her as one of our own. Similarly, the setting for her new steampunk novel Boneshaker is the Pacific Northwest, as opposed to the Southern settings of Four and Twenty Blackbirds and Fathom (Tennessee and Florida, respectively). We’re also super excited about Cherie’s new ventures in the shared world of the Wild Cards series, edited by George R.R. Martin. I saw Cherie recently at Penguicon in Detroit–she’s a beauty, a ball of energy, and looks great in costume. I took the opportunity to open her skull and pick her brains a bit, just to see what makes her tick. You know…like I usually do.

Corsets and Goggles and Superheroes, oh my!

Alethea Kontis: What’s the most difficult part of a steampunk costume?
Cherie Priest: Integrating color. My friend Jess Nevins says that steampunk is what happens when goths discover brown, and he’s at least partially right–but the Victorians loved loud, tacky color, and so do I.  And although I appreciate a good charcoal outfit that sucks up all the light in the room, sometimes you just want to get a little festive.  Fortunately, it’s easy and fun to add a certain “Ringling Brothers” vintage carnival element with the help of stripes, oranges, reds, and golds.  Add some colored petticoats and skirt lifters, and you’re good to go.

A lot of people think that the corset must be the hardest part, but it really isn’t.  If you have a good, properly fitting corset with serious, sturdy boning (steel or fiberglass), after the initial shock of getting the thing on correctly, they’re quite comfortable over the long haul.

AK: What’s the best way to remove coal stains from a corset?
CP: If Oxyclean doesn’t do it, then I say just smudge the rest of it down with charcoal for an old-fashioned, blue-collar working-class look.  It’s not a bug, it’s a feature!

AK: What should one look for in a decent pair of aviator goggles?
CP: It depends on if you’d like a pair to wear, or a pair to stick on a hat for an accent.  If you’re looking for a wearable pair, you don’t want something too hot; avoid fur-lined or rubber-sealed lenses, and look for something with a more open, spectacle-style design if possible. Even a nice light foam rim will get sweaty in time.  Also, adjustable straps are a must, because what’s comfortable at breakfast won’t be comfortable at suppertime.  And make sure the lenses aren’t tinted too darkly, unless you’re using them as sunglasses and plan to spend all day outdoors. Eye strain isn’t sexy on anyone.

If you just want something to mount on a top-hat, then pretty much anything goes except fragile pieces that might not survive the height, any dancing, or the constant pull on the strap. Vintage goggles are awesome (I have a WWII pair, myself), but you have to treat them a little more gently.

AK: Make-up or no make-up when wearing goggles?
CP: I always wear make-up under the goggles, because I never wear them very long.  More than a few minutes on the eyes, and they leave a goofy raccoon ring impression that takes forever to fade.  So I tend to just keep them up on my forehead, or on the front of a hat.

AK: Have you ever been up in a hot air balloon?
CP: Now that you mention it, I haven’t …

AK: Who’s the craziest character in your family?
CP: Oh, I’d better not go there.  Besides, my family is stuffed with so many bananas, how could I pick just one?

AK:What sort of historical research did you have to do for Boneshaker? How was it different from Four and Twenty Blackbirds?
CP: Well, I started by taking the Seattle Underground tour nearly a dozen times, and generally getting to know my way around Pioneer Square downtown (which was easy, since I worked there for about six months).  Then I nabbed every bit of weird local history I could find, including strange ghost stories and bizarre historic characters, and started stalking the cemeteries for names and peculiar facts.

Finally, I made up a bunch of stuff about zombies and decided I’d stick a big wall around the place.  It was really a lot of fun.

Four and Twenty Blackbirds (and the subsequent Eden books) are all set in a real city in the real present, though there are definitely fantastical elements peppering them throughout.  But Boneshaker is an alternate-history version of Seattle, set around 1880.   And beyond that, there are plenty of more general thematic differences.  For example, Eden’s books are about Eden and maybe a couple of other people; they’re very tightly focused–but Boneshaker comes with a cast of thousands and a sprawling backdrop of historic weirdness.

AK: What’s it like working in the Wild Cards universe?
CP: It is awesome and terrifying.  This is a world where there have already been about 20 books written over the last 25 years or so, not to mention entire role playing games and reference volumes of world canon.  Sometimes it feels so huge that I have no idea how to start writing; I’m afraid I’m going to fictionally step on someone else’s character, or mess up something in the canon continuum, or do something that breaks the rules of the Wild Cards universe.

But at the same time, it’s very rewarding and I’m learning a lot. I’m not quite halfway through my portion of the next Wild Cards mosaic (Fort Freak), but I’m quite frankly very proud of what I’ve got so far.

I moved around quite a lot when I was a kid; I went to about eight schools all told, and I lived all over the country … so it’s always neat to reconnect with people I knew back in the day.

AK: You’re working on so many projects…what *aren’t* you doing in the next six months?
CP: I am not sleeping, not keeping my apartment from falling into squalor, and not quitting caffeine like I’d been planning.  But really, it’s better to have too much work than not enough.  I’m always happiest when I have things in the queue; I don’t know what to do with myself when I don’t have a deadline looming.

AK: If you could be any superhero, who would you be and why?
CP: I used to have Wonder Woman Underoos, so she’s the immediate favorite that comes to mind–even though I never liked her background story and until Lynda Carter got hold of her, no one seemed to do anything very interesting with her.  My ambivalence is rooted in the old dilemma of being a girl who loves superheroes… back when I was a kid in the seventies, there was just … Wonder Woman.  That’s all.  So if you wanted to play superheroes with your cousins and friends, well, that’s who you had to be, even if you didn’t like her very much.  Therefore, I eventually acquired a defensive affection for her–and I’ll fight to the death anyone who calls her crap.

Even so, sometimes when I can’t sleep or I get bored while stuck in traffic, I fantasize about actually, formally, thoroughly rebooting her franchise. And it’s the only time I ever consider writing anything like fanfic.