FGB and I went to the Baltimore ComicCon this summer. I have to say I was kind of disappointed — it seems that some of my favorite authors and artists, both in hard copy and on the web, were guests last year. This year, the only person I *really* wanted to see was Barry Lyga.

I jokingly sent Barry a Tweet to let him know I’d be around. To my surprise, he replied and told me he’d be wearing a green shirt–feel free to track him down. Well, good thing FGB had met him before to spot him (plus, FGB is Very Tall). I was looking for green as in “Lantern;” the muted olive Barry wore was nothing of the sort. *sigh* Men.

Once I located Barry I hung around politely until he and some pals from the Good Old Days paused for breath, and then I burst in like any good Fangirl does to have a chat. I’m so glad I did. It made the trip completely worthwhile.

Barry’s a great guy — not only did he give me a book to take back for Kassidy and Ariell, he sent me a signed copy to give away for free right here on my website. That’s right, folks, the Genre Chick is back with a bonus! Leave me a comment on this post telling me who your favorite comic superhero or villain is! Post by October 17, and you will be entered to win your very own signed ARC of Archvillain.

Archvillain is a fabulous book, by the way — Kyle Camden’s adventures are a lot of fun, and a quick read. Be sure to give it to your kids…but not before you get dibs on reading it first. That’s what I did. In return, I let Ariell ask Barry a few questions of her own. And given certain requirements and existing parameters, it appears very likely that Barry will be coming to live with us in the near future…

Princess Alethea: Kyle’s mom is horrible in the kitchen. Are you a good cook?

Barry Lyga: Not at all! The results of my culinary skills are best described as, “Usually edible, won’t kill you (probably).”

Princess: What kind of kid were you in high school? Did you have an archnemesis?

Barry: I was a total and complete geek in high school, with all that entails. My first book — The Astonishing Adventures of Fanboy and Goth Girl

— is pretty close to autobiographical. I didn’t have a single specific archnemesis, but there was a group of three or four guys who just seemed to delight in making my life miserable.

I’m happy to report that — as best I can tell — none of them ever accomplished anything more than making me miserable in high school. 🙂

Princess: What were your favorite comics to read in high school?

Barry: My absolute favorite comic book was LEGION OF SUPER-HEROES, hands down. A veritable army of teenaged superheroes, fighting crime and protecting the universe in the 30th century. What’s there NOT to love about that?

Princess: Who are your top 5 heroes?

Barry: Oh, boy. I assume you mean heroes of the caped variety, not people like Gandhi, right? Let’s see…

4) Supergirl (all the powers of Superman, but with a different perspective)

5) Wildfire (dude gets turned into deadly anti-energy and exists only as a cloud of the stuff given form by a special protective suit — power, pathos, tragedy, all in one character)

2) Nemesis Kid (super-power: He can defeat any single opponent, no matter who it is)

4) Lex Luthor (goes toe-to-toe with Superman, using only his brain)

Princess: Do you believe that all villains are not evil, just misunderstood?

Barry: God, no. Some of them are just pure evil. That’s actually the fun of writing Kyle for me — he’s completely NOT evil, but he’s the “bad guy” nonetheless. Of course, ALL villains believe that they are misunderstood, but there are some truly evil monsters out there. I don’t think Joker or Darkseid or the Red Skull or Dr. Doom are just “misunderstood,” after all.

Princess: Why do 95% of superheroes have girlfriends with red hair?

Barry: LOL! I’m not sure it’s that high a percentage, but it’s up there, isn’t it? I think it’s because most heroes are brunets or blonds, so the red hair makes the girlfriends stand out on a comic book page.

Either that, or comic book creators are obsessed with Charlie Brown’s little red-headed girl. 🙂

Princess: What’s next for Kyle?

Barry: In Book 2, Kyle meets another supervillain…and this one might be even SMARTER than Kyle! Is the town of Bouring big enough for both of their egos? Probably not…

Princess: What color is your iPod?

Barry: iPod? What is this iPod of which you speak? I have an iPhone. It is, sadly, black. (Where’s the white iPhone 4, Apple????) Oh, and now that I think of it, I do have a silver iPod shuffle, too.

Princess: What are your superpowers?

Barry: I can actually hear carbonation bubbles popping in a can of soda from across the room. Utterly useless, I agree. 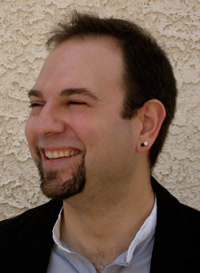 Ariell: Will you come live with me?

Barry: It depends — do you have awesome Thai food nearby? Is there a place for me to hook up my Xbox?

Ariell: Will there be another book in the Fanboy & Goth Girl series?

Barry: Well… Maybe. I truly don’t know. I don’t have any plans for one, but then again, I didn’t think I was going to write Goth Girl Rising

, either. So you never know. But don’t hold your breath. Even if it does happen, it’ll be a few years away.

In stores now:
The Astonishing Adventures of Fanboy and Goth Girl

Geektastic: Stories from the Nerd Herd