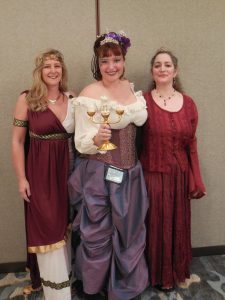 Deborah is a witchy professor in her own right–she’s written multiple books for Llewellyn on the subject. She also penned a fantastic series based around the mythology of the legendary witch Baba Yaga.

In fact, I first met (read: fell in love with) Deborah when we sat next to each other on a panel at Coastal Magic and she began talking about her series. I thought to myself, 1.) She absolutely knows what she’s talking about when it comes to fairy tales 2.) I need to get this series and 3.) I bet we’d be friends.

Turns out, she was thinking much the same thing! Oh, yeah. KINDRED SPIRITS.

Deborah is going to be part of the cast of Princess Alethea’s Traveling Sideshow when it makes its debut at Coastal Magic this year, so Deborah and I were having an email chat. At which point she asked me if I would like to be a guest on her blog.

“Sure!” I said, because Besphinxed was coming out–it’s the witchiest of all my Nocturne Falls Universe books so far, so it felt entirely appropriate.

“Great!” she said. “Write me 500 words on the nuances of retelling fairy tales from different points of view and have it on my desk by Monday.”

So I did. You can read it HERE.

Yeah, I know…I’ve always been a teacher’s pet. What can I say? I LIKED SCHOOL.