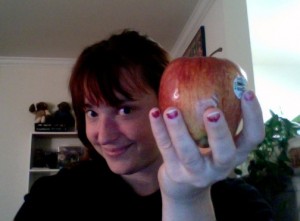 First of all, I want to give a HUGE thank you to everyone who stopped by here and shared their love, as well as my friends on FB and Twitter. I am a Princess who cherishes her Brute Squad proudly…and I know that Mom for one will be thrilled to see such an outpouring of support here on my site. xox

In light of yesterday’s post-fat-shaming rant, I thought it might be a good idea to chat about things I do and don’t eat while on book tour, and why. It’s an informal list I keep in my head, though–like everything else–it’s probably a good idea that I officially write it down somewhere. (This way, too, I can always go back to it and edit and add things I forgot.)

Now, every person is different, so I don’t recommend these ideas for everyone…but hopefully this list might give you some things to consider that you might not have before. And do I adhere to this strictly? Man, I wish. But yes, when I am out of town, I am very aware of everything I put in my mouth…for better or worse.

Since I am prone to migraines (they are not food induced, but certain foods can raise or lower my tolerance) I tend to focus more on protein while I’m on the road. I am not a vegetarian (and I’m okay with that). I prefer fish to steak, but I can’t always afford it.

Like many folks, I am on a budget. I have to promote myself throughout the year on what I make on my royalties. I get to write it all off as a business expense later…but I still have to pay for it up front. I got my advance for Book Two and Three last year. Book Two just released in October, so I won’t get those royalties until next year. All I’ve had to live on this year are hardcover sales of Enchanted and the first month it was out in paperback. THAT’S IT.

I do not smoke, nor do I drink alcohol. This helps with the budget (as well as the migraines).

According to my nutritionist, I need to be eating 672 small meals a day. This has been the most difficult part of my journey so far.

–Protein bars. These aren’t just the over-the-counter bars, they are supplements supplied by my nutritionist. They are hella expensive, but they pack the most protein punch (and vitamins) for the least amount of calories. (I used to carry granola bars, but they weren’t staying with me long enough, and the headaches still came.)

Along with protein bars I have other protein snacks and shakes…though the shakes are chalky and kind of horrible unless you mix them properly with a submersible blender. Not something I carry on the road. These help me eat more often and stave off migraines. I survived Dragon Con this year living off protein bars & snacks…and I also lost 5 pounds.

–Water. Carry a bottle with you at all times. Refill it at every water station or fountain. Keep it in your hand, especially if you are a social drinker. Staying hydrated is SUPER important.

–Vitamins. Okay, technically I’m not eating these, but I’m never without my daily multivitamin, and possibly Vitamin C and D. Joe and Leanna will tell you that if you’re rooming with me, I will probably force them upon you as well.

–Tea. I carry a travel bag of various teas with me all the time. Black tea, green tea, and chamomile. I even bring honey and my own travel mug to Dragon Con.

–Protein. My preferred protein is seafood, though that can get expensive. Chicken is okay, but often is dry when grilled by a substandard chain restaurant (and dangerous when undercooked). Steak is okay, but can also get expensive. So when I’m on the road I typically go for a hamburger. Most places make a decent burger, and standard cooking temp is medium well, which cuts down on the possibility of illness.

–Vegetables. Good veggies are hard to get on the road. Salads at restaurants are typically overpriced and sub par (notice how your hamburger toppings are higher quality than your salad?). Veggie side-dishes are usually bland (carrots, broccoli) and over- or under-cooked. But if there’s asparagus or sweet potato or plantains or Brussels sprouts (!), I go for it.

–Apples. I love stealing these from the continental breakfast and saving them for later. Bananas are also great, but have a much shorter shelf-life.

–Oatmeal. Also something I toss in my travel bag & keep with me. I carry dried fruit, nuts, and cinnamon as well. What I most often forget is THE SPOON.

–Rice noodles. Rice is another things that’s typically improperly cooked at restaurants…but rice noodles are made of awesome. If Thai is an option, I’ll happily go for it. Bonus: Cold pad thai is great for breakfast, if my room happens to have a fridge.

–Sushi. This rice is cooked properly. It has to be. And other than the expensive part, it’s just SO fabulous.

–Greek Food. Because I was raised on it.

–The Local Cuisine. If a place I’m in is known for something famous (Memphis ribs, Beignets at Cafe du Monde), then I will absolutely try it, even if it’s on my “don’t” list. I just won’t overindulge, if possible.

–Coffee. This stinks, but it’s true. I’ll let myself off the hook and sneak in a coffee when I’m dying for a hit of caffeine…and then regret it later when I’m stuck in the bathroom with an upset stomach. It doesn’t happen all the time, but I’d rather take a couple of Excedrin than tempt fate with that crapshoot.

–Salads. If it’s spinach greens, beets, goat cheese, and salmon, sign me up. In the last six weeks, I saw this option on ZERO menus across the US. Salads are usually iceberg lettuce, a handful of tomatoes, a couple of cucumbers…and it all tastes funny because it’s been pre-refrigerated and/or covered in preservatives. My stomach doesn’t react well to preservatives. We’re talking food poisoning-like symptoms.

–Pasta & Bread. Apart from making me feel sleepy and bloated, I try to stay away from most carbs, dairy, and sweets because it makes getting a migraine a lot easier.

–Sweets. Desserts, like magic, are best when shared. The sugar is just too high a spike and too hard a crash. This includes candy of any kind, which I will often hoard and then never eat. If I have to snack, I prefer nuts.

–Eggs. Oh my gosh, I’ve had some HORRIBLE experiences with eggs. Enough that you think I’d know better by now. No more eggs on the road for me.

–Continental breakfast. The stuff they have at most hotel breakfasts is terrible. Eggs (see above) and proteins full of nitrates (sausage, bacon)…if there is protein at all. Sometimes it’s just wafflemakers or sugary danishes or what I like to call “three-mile muffins” (because I have to run 3 miles to burn off that many calories). If this is an option, I will often select a peanut butter bagel or english muffin…or oatmeal. Most of the time, though, I’ll just eat a power bar in my room and steal an apple for later.

–Pizza. OMG no pizza. Like, ever. I’m not even a fan in the first place. I know, I know…I’m a weirdo. And I’m comfortable with that.

–Sodas. I will have a Coke Zero when I fly, because I get sick when I fly (migraines are so much fun!). Otherwise, it’s water and tea for me, and I’m fine with that.

Any recommendations, folks? For or against?