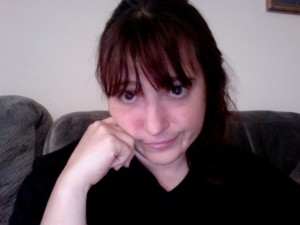 Yup. You read that right.

In all my 37 years on this planet, I have never before had a fat-shamer doctor. Oh, I’d heard stories about them, horrible stories…but like all the other stories like these, I never thought it would happen to *me*.

This guy is my GP –I’m not someone who gets sick all the time (just accident prone), so I usually make do with a decent Urgent Care. I found Dr. Dude last year after I came home from 100-driving-hours on book tour a broken woman. He told me to take a bunch of vitamins and do hot yoga — I decided to go for therapeutic massage instead (and thanked the gods for every minute). I saw him again this fall when I bit the bullet and decided to ask for anti-anxiety meds (that’s a whole nother story).

The first thing this guy did was walk in and say, “Congratulations!” like he’d just heard I was pregnant. I actually thought he might be in the wrong room, or was confusing me with someone else.

“Congratulations for what?” I asked.

No, actually, it wasn’t exciting. Losing ten pounds since the last time he’d seen me–A YEAR AGO–was really no big deal. Besides, I wasn’t there to talk about my weight. I was there to stop the voices in my head from screaming 24/7 and making me manic and depressed all at the same time.

But he’s my doctor, right? Your doctor is supoosed to be able to talk to you about your weight. If he got off on it, well, good for him. I shrugged, and we went on with the appointment… during which he asked me what I ate on a typical day. Everything I told him, he shot down as horrible. I actually cried and snapped at him.

It still left a bad taste in my mouth. Had I been listening to myself (or able to hear above the screaming) at the time, I would have walked out of that office and never come back, just based on the slimy way I felt afterwards.

Fast forward to today, a few months later. The anxiety meds (once I cut the dose in half) are working like a charm. Today was just a follow-up visit, in which I answered questions on a survey, answered them again for the assistant, and then waited 45 minutes to answer them again for Dr. Dude.

Am I depressed? No. Am I suicidal? No. Am I still having trouble sleeping? Not nearly as much as I was. Am I any of this list of things…? Yeah, “Tired.” Pretty sure I said “Fatigued” and “Tired” a lot. But then, I have just come off book tour. It’s to be expected. But maybe it’s the meds…I don’t know.

Dr. Dude came in and said hello, and I had to explain my t-shirt to him (because “Hooked on fonix dun good four me” is funny when you’re a New York Times Bestselling author). Then I answered all the questions: fine, fine, yes, no, fine fine, tired, yes, fine.

Then he scrunches up his nose and says, “Hmm…well, this is awkward but I have to bring it up…”

“…you’ve gained some weight since you were here last.”

Yeah, like 4 pounds. Four pounds that could probably be explained away by hydration, stress, time of day, and the heavier clothes I’m wearing since it’s…you know…colder outside now. BUT HE’S MY DOCTOR, and we’re supposed to talk about this stuff, right?

So I shrug. “It’s fine. I’ve just been on book tour the last six weeks.” And then I made some comment about difficulty eating on the run, or on the road, or something.

This time, his entire body squinched up and he said, tentatively, “…Salads?” As if I had never heard of such an invention.

I’ll say this for Zoloft — it kept me from punching Dr. Dude and walking straight out of that office right then and there, SO I GUESS IT WORKS AFTER ALL. I think another part of me was just so shocked that this asshole had pretty much just told the fat girl to eat a salad that I was frozen in place.

“That’s not the problem,” I said after a moment. “My problem is that I don’t eat. I get busy and I don’t think about it.”

“Oh. Then have you considered keeping power bars with you?”

This guy was about 14 steps behind. “That’s what I do. It’s still difficult. I’m still working on it. It’s a work in progress.”

See, I know all this because I am actively on a weight loss program separate from this doctor (and thank goodness). They have said as much to me, and it makes sense. I don’t have seriously terrible eating habits as far as food choices go, but I have a tendency to NOT EAT AT ALL when I’m busy and performing. Instead of dropping a few pounds like a normal person, my body goes INSTANTLY into “starvation mode.” I swell up, despite being adequately hydrated, and the migraines have a field day… It’s one of the most annoying things possibly ever.

This same thing happened to my bestie Sherrilyn Kenyon, who lost a bunch of weight a few years ago. “My nutritionist told me I had to eat to lose weight!” she said, like it was the coolest thing ever. I am here to tell you that it is not the coolest thing ever. Training yourself to eat 345 small meals a day when you’re used to eating until you’re full and then moving on with your life is TOUGH. When you’re touring, it’s NIGH IMPOSSIBLE. Sherri is to be commended. But then, she had a nutritionist. And now, so do I.

But I don’t *need* to lose weight. I want to, for my overall health and my sore feet, but every other doctor I’ve had, including my Gyno, thinks I’m just fine. I have a heart like a horse, my blood pressure’s great, I don’t smoke or drink alcohol, I don’t get sick very often, and I work out regularly. I actually *did* try to bring up my weight with my Gyno last year. He waved his hand at me and literally said, “Eh, you’re fine. Just keep doing what you’re doing.”

But–again–my appointment today was NOT to talk to Dr. Dude about my weight. My weight had nothing to do with this appointment, unless he thought the medication was causing the uptick in weight, which was very possible. Not that it was something he suggested, by any means. Because Zoloft is far less likely to be responsible for that four pounds than the DEEP FRIED CHEESE AND MAYONNAISE BALLS I consume on a daily basis BECAUSE I AM A FAT WOMAN. [Edit: I apparently have no idea how to even *spell* mayonnaise and had to let the computer correct me here. LOL]

After thinking about this whole scenario–as authors are wont to do–I came up with several conclusions (besides the fact that Dr. Dude is an unprofessional jerk):

1.) By saying “Oh, this is awkward,” HE made the situation awkward. A professional doctor would have simply noted the weight gain and asked after its possible causes. After hearing a plausible one, he would have said, “Well, we’ll keep an eye on it just to make sure it’s not the meds.”

2.) I’ve been around enough introverted socially awkward geeks in my life to know one when I see one. This was not innocent social awkwardness. This was…prejudice? Assholishness, if you will.

3.) No doctor should be allowed to make sweeping generalizations about a patient’s life. I can *maybe* see this accidentally slipping out if we’d been actively having conversations about my nutrition, but we hadn’t. And it’s not like he was ever taking notes, because I essentially told him two months ago that I mostly ate salads for dinner while at home because I don’t like eating carbs after 4pm. (Someday I’ll put a recipe up for my “power salads.” Amanda Havard and I bonded over this, because she does the same thing, only with kale instead of spinach.)

4.) “Salads.” I want to go back and bitchslap that man with a menu. Because the answer to every overweight person is “Salad”? Have you SEEN A RESTAURANT MENU LATELY? When you’re touring, you’re lucky if you can find a chicken caesar salad…and there’s only so many of those you can have before you want to puke. Most salads in chain restaurants are made with iceberg lettuce, a handful of tomatoes, two cucumbers, and eggs and onions I don’t want. Even Greek would be acceptable, but most American joints only serve cheese that comes out of cows. There aren’t a lot of options that come with spinach greens and beets and goat cheese or salmon. I know, because I’ve looked.

The thing is, I actually considered just sucking it up and going back for the next follow-up. It’s not like I’m going to see this guy what…three or four times a year? But “…Salad?” keeps flashing in my mind, right along with that squinched-up face of his.

When I got home, I had an email to check the patient portal. This is actually a cool service this clinic does — they securely email you all your pertinent information in case you want to print it out and keep it for your records. It goes over what you came in for, what you talked about, and what the doctor prescribed.

Among my symptoms today, the doc listed “Obesity.” At no point in time did I ever list this as a problem. Because it’s NOT.

Among the things we talked about, he listed “Obesity” again and “Nutritional counseling.”

Dude…if “…Salads?” is your idea of nutritional counseling, then YOU’RE FIRED. In fact, you’re fired right now. You will never see another dime from my insurance company. If I thought I could do it anonymously, I’d report you as a fat-shamer on every online review site.

And if I wasn’t on successful anti-anxiety meds, I’d totally find your car and cover it in Caeser dressing.

34 thoughts on “In Which Princess Alethea Gets Fat-Shamed”