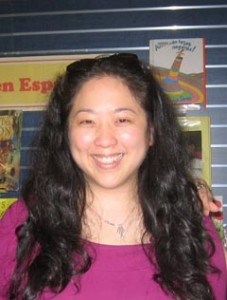 I met Emily Jiang in San Jose at this year’s Nebula Awards Weekend. The group we were with all hiked to a restaurant for lunch and Emily and I sat across from each other.

Sometimes, that’s all it takes to fall in love with a person.

The minute I found out Emily wrote (and sang!), I asked her to take part in this month’s Interview Extravaganza. Please enjoy!

Emily Jiang: Creating characters that are from you, perhaps similar to you, but definitely not you.  Creating worlds where these characters love and laugh, fear and fail, and try, try again.  Playing with words and images and sounds until everything sings with Truth.

of the writer with readers–

the magic of words.

and seeing nothing, hearing

It’s when your characters refuse to talk to you because they decided they didn’t like the Great Exciting Plot that you had spent hours carefully planning for them, and then they decide to take off on Their Own Greater Adventures and all you can do is follow and take copious notes.  This happens more often than I would like to admit.

EJ: Writing is like eating a bigger-than-your-head bowl of ice cream, only without brain freeze and the consequences of calories.

EJ: My ideal writing space would be secluded up in a tower with a window facing a gorgeous lake bordered by lush trees. However, realistically, I write in the transitory, in-between spaces, on the train or subway, in a library or café.

With paper and pen

I’ll visit the moon and Mars

on my way to stars. 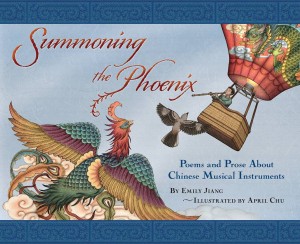 EJ: painter of words and sounds

EJ: The kind that I can climb to hide from the sun and clouds above and random wanders below. The kind that bears fruit so I could stay in the tree as long as possible.  The kind that comfortably supports my entire weight yet sways gently with the wind.

to swing me from its branches,

EJ: I always carried at least three books and my journal, in which I scribbled poems, stories, and epiphanies.  I am naturally quite shy and introverted, and high school was a difficult time for me.  It was a time when I began to interact with more and more people.  Instead of learning sonatas and concertos, I played piano in chamber groups, where I learned how to listen.  Instead of studying alone, I became part of the Academic Decathlon team, where I learned how to improvise speeches.  Instead of singing solely in the shower, I auditioned for and sang in the State Honor Choir, where I learned the concept of creating art in community.  I was, still am, always will be, a total geek.

I write books for kids

because as a kid, I read

EJ: Embrace fresh perspectives because the glass is always full (half full of water + half full of air).

EJ: 1)  Visit each continent at least once.

2)  Write an opera and a musical, though not both in the same year.

3)  Learn the language of trees.

Emily Jiang is the author of Summoning the Phoenix: Poems & Prose about Chinese Musical Instruments, illustrated by April Chu and published by Shen’s Books.  Emily holds an MFA in Creative Writing from Saint Mary’s College of California and a BA in English from Rice University.  Her fiction has won several awards, including Top Prose Prize in The Binnacle’s Ultra Short Competition, First Place in the Tom Howard/John Reid Short Story Contest, and the Sue Alexander Award for Most Promising New Manuscript from the Society of Children’s Book Writers and Illustrators.  Her poetry has been published in Stone Telling, Strange Horizons, Goblin Fruit, The Cascadia Subduction Zone, and The Moment of Change anthology of feminist speculative poetry.  She wrestles with words everyday.  Sometimes she wins.  Other times, it’s a draw.  More details can be found at her website: www.EmilyJiang.com