I was instantly struck by Shanna Germain the moment I met her. No, not physically, silly people — it was just one of those instant connections on a higher plain. Of course, she was already a very good friend of my very good friend Mary Robinette Kowal…and dear friends of my own dear friends are instantly cherishable to me. Shanna was one of these.

In the time since we’ve met I’ve come to know Shanna even better, as one does through social media these days. She has become even more beautiful to me, inside and out. She is strong and optimistic and assertive and SMART…and fearless about all of the above. We are more than birds of a feather–we are plates in the same shining armor.

And so I thought it fitting to post, on this Independence Day, a woman who I believe is a goddess of independence in her own right. May you all fall in love with her just as easily as I have.

Shanna Germain: Hearing from readers that I’ve touched their hearts, minds or other body parts. There is nothing more satisfying than someone saying that your words moved them, that your story brought them pleasure, or that your poem helped them deal with something difficult. I write to break open the mysteries of what it means to be human, to be vulnerable and alive, and part of that exploration is sharing stories with others and touching their lives.

SG: The fear that I’m not doing the story and the reader justice. The reader is giving me his or her precious time and attention, and I want to honor that as much as I can. So I always carry this worry that I’m failing the story, and in doing so, failing the reader. It makes me a fierce writer, though, and one who refuses to compromise my stories in order to fit into certain genres or make a sale.

I think Florence and the Machine say it best in their song, “Falling,” when they say: Falling’s not the problem / When I’m falling I’m in peace / It’s only when I hit the ground / It causes all the grief

So, writing is like falling and the rest of the work – editing, publishing, marketing – is like hitting the ground. Back to reality after this wonderful, joyous sense of breaking all the rules (even gravity).

SG: Right where I am now, on my couch, next to my loved one, with The National on the Sonos and an iced soy mocha at my side. After that, a beach somewhere, but only after they’ve developed laptop technology that allows you to actually see your screen in the direct sun. 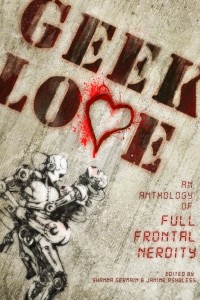 SG: The sugar maple. When I was a child, I spent hours and hours with my grandfather tapping maple trees and then boiling the sap to syrup. I have great memories of that time, and all that I learned. And the way the trees turn vivid colors always reminds me of fall on the east coast, where I grew up.

SG: I’ll give you an idea: silver braces, red glasses, Sun-in, bad perm. In essence, I was a total geek who was too shy to talk to anyone, so everyone thought I was a snob.

Things haven’t changed that much. Except sometimes I forget that I’m shy and actually carry on a conversation with real people.

AK:The Colin Harvey Memorial Question: What are 3 things you’d like to do before you die?

SG: Keep learning and being curious right up to the very end.

Have a dog in my life again.

Live in five countries other than the U.S.