There are some people in this life who are just meant to be present at pivotal moments, as if the universe put them there to witness that yes, this thing happened, and it happened to you. Those people become legends in your memories, almost surreal and dreamlike.

Geoffrey Girard is one of my legends.

We met at some tiny little convention so many years ago I’m afraid to count, back when I didn’t wear corsets…or makeup…and hadn’t published a damn thing (but had a Big Fat Looming Contract that would eventually render that status moot). Geoff had a book or two out–one about Pirates–and I hosted an interview with Cap’n Geoffrey that remains infamous to this day.

When you do a search for images under my name in Google, this old picture pops up of me & Geoff at the Joseph Beth in Lexington. Ah, memories…

I couldn’t be prouder to announce the impending publication (Sept 3rd!) of both Geoffrey’s new novel CAIN’S BLOOD and its YA counterpart PROJECT CAIN from Simon & Schuster. I am really looking forward to getting my hands on both of these! (Way to overachieve there, boyo, and make the rest of us look bad…)

And yes, he still has great hair.

I am thrilled to have Geoffrey back again and under the interrogation lamp for our MoAA FINALE. Many thanks to Geoffrey, and to all of my interviewees and readers this month–it’s been a blast! 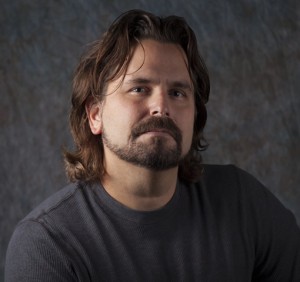 Geoffrey Girard: I read to learn: new places, people, ideas, facts. Writing, for me, is an extension of that, so I probably most enjoy the research.

GG: Despite my years as an advertising/P.R. copywriter (when you had to write quickly), I’m still a victim of self-editing when it comes to fiction. I can’t produce 4,000 words a day like some, and usually end up just reworking the same 500 words over and over and over.

GG: … a sculptor slowly chiseling away at this enormous rock with a figure trapped just inside. Takes time. Not always perfect. Slowly emerges. Polish. Hope for the best…

GG: Cliché answer, I suppose, but on some coastline. Any coastline. (Thus I do all my writing in Ohio.)

GG: One with squirrels or birds on it.

GG: Curious. Liked learning. Liked participating in class (probably why I’m a teacher now). Very small circle of friends, but could hang well enough along the fringes of most social cliques. Spent most hours playing guitar with my pals/bands Surrender (it was the early 80s, give me a break) and The Shire (yeah, how awesome were we?)

GG: Live in Asia for a year (first choice: Japan)

Play with my great grandchild (first choice: NOT 15 years from today)

Geoffrey Girard is an award-winning fiction author whose works have appeared in several best-selling anthologies and magazines, including Writers of the Future (a 2003 winner), Apex Digest, and the Stoker-nominated Dark Faith anthology.

His first book, Tales of the Jersey Devil, thirteen original tales based on American folklore, was published by Middle Atlantic Press in 2005, followed by Tales of the Atlantic Pirates (2006) and Tales of the Eastern Indians (2007).

Simon and Schuster will publish two Girard novels in September of 2013: CAIN’S BLOOD, a techno thriller, and PROJECT CAIN, a spinoff novel for teen/YA readers.

Born in Germany and shaped in New Jersey, Geoffrey currently lives in Ohio with his wife and two teenaged sons and is the English Department Chair at a famed private boys’ high school. Prior to teaching, he worked as an advertising copywriter, web developer and marketing manager. He has a BA in English literature from Washington College and an MA in creative writing from Miami University.