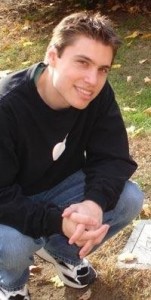 It’s only fitting after posting Emily Whitten’s big announcement about her project with Benjamin P. Fisher that I spotlight an interview WITH BENJAMIN P. FISHER, right? And so the universe remains at peace.

Emily turned me on to Ben’s Splitsville with her review on ComicMix — a book about a superhero who is also his own villain? Just about the awesomest case of schizophrenia ever. If you live in Comic Book Land. And you’re not that guy.

Ben’s a pretty awesome guys too…of course, after we met at HeroesCon and I picked up Splitsville, I completely forgot to get a picture of us, for which I’m still kicking myself. But that’s okay. There will be other conventions. And more great projects.

Take it away, Ben!

Author or Artist?
Author. I’m genuinely the worst artist in the world. My most painstakingly crafted drawings are indistinguishable from hamster droppings.

Who are your professional role models?
Brian Bendis, Warren Ellis, and Peter David are why I started writing comics in the first place. Obviously Gaiman was (and is) brilliant, and anything Hickman writes is automatically added to my pull list.

What’s your favorite writing/sketching weather?
It depends on the book, I suppose. When I’m writing something dark, rain certainly helps set the mood.

Set your current playlist/musical device to “shuffle all” and hit PLAY. What’s the first song that comes up?
“Forever Your Girl” by Paula Abd— I mean, “Stinkfist” by Tool. Yes. Yes, that’s what I meant.

If you could win any award, which would it be?
Is there an award for having the most awesome collection of Masters of the Universe Hot Wheels?

Would you rather have magical powers, or a spaceship?
Spaceship. In my head, everything I say is in the voice of Captain Mal Reynolds anyway.

What was your favorite book as a child?
There was an beautifully illustrated book I adored as a child called The Rainbow Goblins by Ul De Rico. If you haven’t seen it, you really, really, really should.

What thing do you wish you could go back in time and tell your 10-year-old self?
That the statement “Why is Apple making an mp3 player? That’s the worst idea I’ve ever heard.” will come back to haunt you.

What’s your favorite constellation?
Orion. Three stars for the belt, and everything else is up to the imagination. Now THAT I can draw.

What thing are you most proud of?
I already mentioned my He-Man Hot Wheels, right? In all seriousness, I’m very, very proud of how Splitsville came out – it was my first attempt to do both a superhero-type story and also a graphic novel-sized comedy book. I’m thrilled with the results. I’m also working on a (top secret!) joint project with another author, Emily Whitten, and the world-building we’ve accomplished thus far has been exponentially more detailed and epic than anything I’ve ever worked on previously. I’m incredibly excited about it.

The Colin Harvey Memorial Question: Name 3 things on your List of Things to Do Before You Die.
Arm wrestle Felicia Day.
See Stephen King’s Dark Tower as an HBO series
Write Deadpool, Moon Knight or the Teenage Mutant Ninja Turtles

Ben Fisher is the author of several comics and graphic novels, including “Hexen Hammers” and the Eagle-nominated “Smuggling Spirits.”  The first issue of his three-part series “Splitsville” – following a superhero whose arch-nemesis is his own split-personality — is set to be released in hard cover this fall.

You can find Ben online at: http://www.ben-fisher.com/