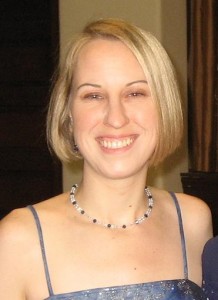 Today’s interview features he gorgeous and glittery Emily Whitten. (And no, if you read yesterday’s interview with Jeremy Whitley, I am NOT going in Alphabetical order. It just seems that way.)

I met Emily at Nebula Weekend last year, after she accepted the Andre Norton Award for Young Adult SF on behalf of Terry Pratchett. There was this beautiful blonde girl, walking up on stage, and I thought, “Man, it’s a shame I don’t know her. I really probably should.”

Fast forward to a large circular table at a post-Nebula Italian lunch, with a bunch of friends…and I’m suddenly sitting right next to the pretty blonde girl. I think it was awkward for about 3.5 seconds, before we realized we both loved comics and fantasy and Neil Gaiman and music and…and…and I started taking notes.

Emily writes a column for ComicMix and a comic called Ask Deadpool— if you’re into comics at all, you should read her!

But first, read this.

Author or Artist?
Author; although I do also like to dabble in tiny sculpture, which might count as Art? [Yes! ~A]

Who are your professional role models?
There are a lot of pros I admire in the creative fields, and if I were to list all of them we’d be here all day; but it probably won’t surprise anyone who knows me to know that Terry Pratchett and Neil Gaiman are high on the list of living authors I admire. Both have an incredible ability to not only write amazing things, but to constantly keep on writing new and different amazing things, all while juggling the demands of being a super-successful writer. I admire Terry’s sharp wit and uncanny knack for seeing into the heart of humanity and conveying his insights to us through his characters. And I’m jealous of the way he looks so amazingly right in the black hat, because I look silly in hats. I admire Neil’s flexibility in producing consistently quality work in numerous creative mediums. And I’m jealous of The Hair, which truly deserves its own capitals. If it ever met Dylan Moran’s hair, I suspect there’d be a hair fight, and I’d pay to see it.

Another author I admire is Gail Simone. She writes great quirkily funny dialogue and interesting stories, and created some awesome comics characters. And as a woman, I certainly admire her for paving the way with the success of her website, columns, and comics writing for other women looking to be successful in comics. For whatever reasons, comics creating is still heavily skewed towards the male demographic, and some people seem to think that women aren’t as good at creating comics. I’d definitely hold Gail Simone and her work up as an example of why that’s just silly. Also I love her red hair.

What’s your favorite writing/sketching weather?
I really like stormy weather if I’m inside. I live 9 stories up with big plate glass windows and a view, and I kind of enjoy being inside writing away while nature’s going crazy just outside. Also the lightning looks amazing from up there.

But I like sunny days too, so I guess I’m not super-particular.

Set your current playlist/musical device to “shuffle all” and hit PLAY. What’s the first song that comes up?
Margot & the Nuclear So and So’s – A Light on a Hill

Hey! Bonus points because most of the band is from Indiana and one of them went to my alma mater.

If you could win any award, which would it be?
One with a giant money prize attached. Hah! Honestly, I’d be thrilled to win anything. Yay, awards!

What was your favorite book as a child?
OH SO MANY. You are talking to a woman who can walk while texting today because in school, I used to walk the halls with my nose in a book (and I never ran into anyone!). But I’d have to go with Mark Twain’s A Connecticut Yankee in King Arthur’s Court. It works on several levels, which is something I’m always drawn to. The satire and humor is great, and it also got me interested in King Arthur legends, which led me to other Arthur books by T.H. White, Mary Stewart, Stephen R. Lawhead, Marion Zimmer Bradley, and more. I never get tired of that book.

What thing do you wish you could go back in time and tell your 10-year-old self?
I have to pick one thing?? Huh. I’d probably tell Me about the economy crash, so I could have been better prepared.

Wow, what a downer I am.

What’s your favorite constellation?
I like the Big Dipper because it’s so easy to find, and I can always look up and see it wherever I am. Also you can find Regulus and Arcturus through it (and of course Polaris) and I like those names. I mostly like stars and constellations because of their names. I like Orion because I like the name (and Betelgeuse and Bellatrix, both stars which are part of the constellation). Also it points to Castor & Pollux, which I love from the use of those names in The Once and Future King. And in nerdy things, I also like Orion because of how it was used in the TV show Chuck (Spoiler? Has anyone not seen Chuck? Don’t read this bit.) Orion was the code name Chuck’s dad chose as he tried to help his son and find out what had happened to his wife. It was appropriate because he was technically hunting his wife (but not in a bad way). And also I love Scott Bakula, who played Chuck’s dad, so that makes me even more fond of the name.

What’s your favorite fairy tale?
You ask me all the hard questions. Do I really have to choose?? Fine. The Ugly Duckling.

What thing are you most proud of?
I’m pretty happy that I helped make two Discworld conventions happen in the U.S. I’m sure there’s some other stuff, too.

The Colin Harvey Memorial Question: Name 3 things on your List of Things to Do Before You Die.
1.) Finish drafting the first few issues of the super-fun comics series I’m working on with Ben Fisher, and start getting that published. We’ve already come up with an epically massive and comprehensive backstory, a great cast of adorably awesome characters, and several complex story arcs, and plan to launch a Kickstarter soon so that we can publish without losing the rights to a fantastically fun story. [I, personally, can’t wait for this! ~Alethea]
2.) Have a family. With at least one kiddie, because I love kids; and also a great big Great Pyrenees sheepdog.
3.) Go traveling overseas again, possibly to Italy.

Emily S. Whitten has written articles and webcomics for MTV Splash Page, Reelzchannel.com, the Tonner Doll Company blog, and other publications. You can read many of her comics here: http://askdeadpool.wordpress.com/comics/ By day, she is an attorney and a freelance writer. By night, she amuses herself by writing and tweeting (unofficially) as Deadpool. She is a member of The National Press Club, and a co-founder and organizer of The North American Discworld Convention for bestselling author Sir Terry Pratchett. She also has a tiny hamster named Izzy (a.k.a. Ysabell Sto Hamsterlet) who is secretly a superheroine.

She is currently working with fellow comics writer Ben Fisher (author of Splitsville, Hexen Hammers, and Smuggling Spirits), on an epically complex new comics series that pairs post-apocalyptic problems and furry cuteness, and hopes to be able to say more about it some day very soon.