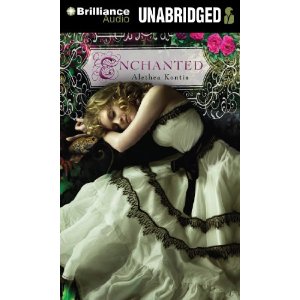 I’ve been friends with the folks at Brilliance Audio for almost a decade. We’ve always said, half-jokingly, that when my first novel was published, Brilliance would do the audiobook.

Brilliance brought me up to Michigan for a tour of their facilities and a John Green event for Paper Towns back in 2008. They took me under their wing and introduced me around the 2009 Audie Awards at BEA so I wasn’t a lost soul. I sat with Tim Ditlow, Dan John Miller, and Jim Dale, like I was a superstar at the Oscars.

Bronson Pinchot gave me a big bear hug that year. I watched Neil Gaiman accept three awards for The Graveyard Book, and joined in the standing ovation for my new friend Katherine “Katy” Kellgren, who also won three awards for her work on Bloody Jack.

To say Katy is amazing would be one of the biggest understatements of all time.  She is a tiny, beautiful woman with dark hair and huge blue eyes who looks like she walked straight out of a Disney fairy tale. Her normal speaking voice is  sweet and proper, with just a hint of British, enough to make you want to wear gloves and invite her to tea.  And yet, when she’d stood in front of us at the audiobook luncheon earlier that day to read from Bloody Jack, she opened her mouth and 700 completely different people came out. Katy is magic, the sparkly, shiny, fairy variety.

“I want Katy to read my audiobook,” I whispered to Tim.

Fast forward a few years. “Someday” has arrived: I have a novel with a major publisher, and a release date. Brilliance Audio officially picks up the audio rights, and there are mutual happy dances done both here and in Michigan. 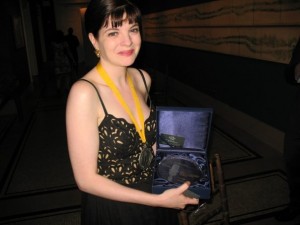 But Katy is now up for eight Audie awards, and was named the 2011 Best Voice in Young Adult and Fantasy by AudioFile. I am a debut novelist with a tiny budget. Having Katy read Enchanted back in 2009 might have been possible–before she’d won those awards–now, it was sort of like shooting for the moon.

Turns out, I’m a pretty lucky princess. I got the moon.

I was having a screaming-bloody-terrible day when I got the email from Natalie telling me that Katy had read Enchanted, loved it, and was extremely enthusiastic about reading the book. Needless to say, my terrible day was blessedly a little brighter after that.

I’m still having a bit of a hard time believing it. I’ve spoken to her on the phone and we’ve talked about pronunciations and accents and made-up songs and hidden meanings, and when I hang up I feel like I’ve just spoken to a movie star. It’s all still a little bit sparkly and fairy dust shiny, and I CANNOT WAIT TO HEAR MY OWN BOOK.

She’s even going to pronounce my name correctly. *spins* 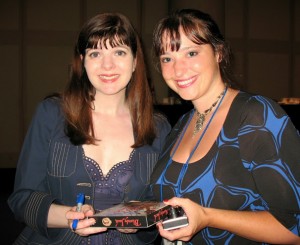 I know you all probably don’t usually spring for audiobooks, but I promise you, this one will be worth it. The unabridged CD lists for only $19.95 (a fabulous price for any audiobook!) and evil old Amazon has it listed right now for only $13.59. If you go on road trips, have a relatively long commute to work, or spend any time in the car with teenagers, this is audiobook’s going to be almost as priceless to you as it is to me.

I look forward to sharing with all of you yet another facet to my fairy tale.

And yes, I’ve already apologized to Katy that the sequel contains pirates…but she’s assured me that she very much enjoys pirates, even after all the L. A. Meyer books. I can’t tell you how relieved that made me. But I suppose if pirates had won me as many awards as they won Katy, I’d still enjoy them too. *grin*