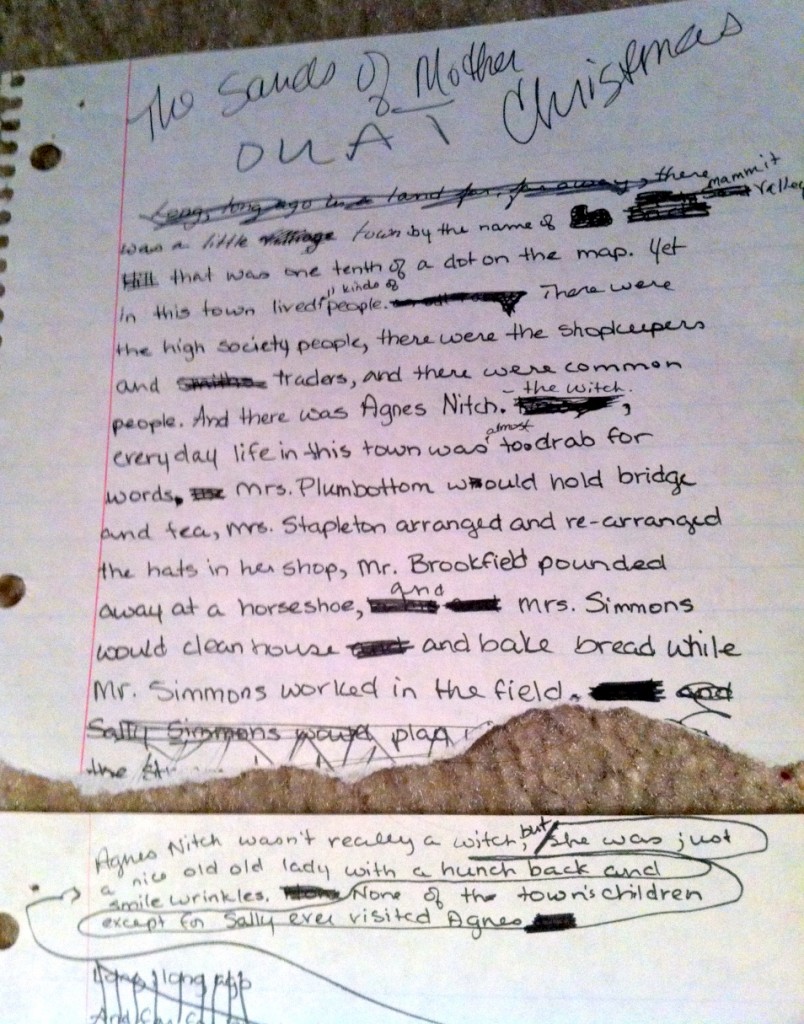 I have saved almost everything I’ve ever written. Fiction, I mean, or poetry, or essays for school, for pleasure, and everything in between. I have several drafts of some things. A lot of it is dated. Much of it is not.

I can’t tell you the exact date I wrote “The Sands of Mother Christmas,” but the age of fifteen sticks in my mind. It was May, so that would have made it the end of my sophomore year. I was also pissed at my mother.

Like the date, I don’t remember why I was pissed, just that I was so incredibly enraged that I picked up a black pen and started frantically scribbling this story in a notebook, not stopping to think, just scratching words out and drawing arrows and writing in the margins and moving along. In many ways, this story was the first I ever wrote completely driven by passion. Some days, I wonder where that passion has gone.

I’m also not sure why anger fueled me to write a story so incredibly sweet and pure about two people whose friendship made the world a better place. It was May in the middle of South Carolina. Perhaps peace of mind at the time was as desirable to me as a small, happy town covered in snow.

I did not share the story with anyone at the time. Instead, I typed it all out on our computer (a Leading Edge, as opposed to my mother’s beloved IBM electric typewriter) and waited until Christmas.

It was rare, but sometimes I could be very patient. This was one of those times.

Christmas Eve was always spent next door at the Ordoyne house. Ora and Dale had (and still have) two children–Devin & Megan–that were a little younger than my sister and me, but close enough in age that we ran thick as thieves the entire time we lived there. If there ever was such a thing as a Greek-Cajun background, we had it, and came by it honestly.

The tradition for Christmas Eve was to have fried oyster Po Boys, followed by the adults playing Bourré (boo-ray) or some other card game. We kids would go off and play…which, with our dramatic background, meant we rehearsed an impromptu Christmas pageant.

I don’t remember every song we sang or dance we did or skit we performed in those years, but it was always fun for us, and an amusing treat for the adults. That year I was fifteen, it was a special year. I pulled out my typed pages of “The Sands of Mother Christmas” and read them out loud to a silent room.

By the time I finished, there wasn’t a dry eye in the house.

Everyone at the Ordoyne house that night remembers that Christmas, and that story. Over the years I’ve tried to revisit it and “update” it…but it just doesn’t sound the same. Anything I try to add just seems to distract from the message of the story.

My friend Gail–the one who submitted AlphaOops for me without me knowing–said that she loved “The Sands of Mother Christmas” even more than the AlphaOops story. We submitted the story to my publisher, but they passed, saying that it was too “Feminist New-Agey.”

Now it’s true that 1.) this story is neither about Santa nor Jesus and 2.) the main characters–Sally and Agnes Nitch–do possess female body parts, but I’ve always been a little confused (and more than a little amused) at that response. “The Sands of Mother Christmas” is about friendship, selflessness, the spirit of the season, and a little homegrown magic. It’s funny what sorts of boxes folks will put things into. 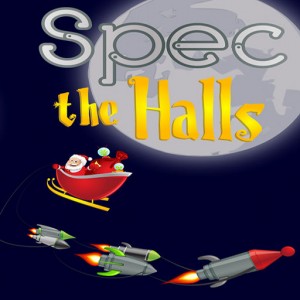 Perhaps one day, this beautiful story will find a publisher who wants to illustrate the heck out of it and share it with the world at large. Right now, I thought it best to put it to good use and include it in the Spec the Halls benefit anthology. All proceeds for this anthology, should you decide to purchase it, go to Heifer International, a non-profit organization whose goal is to help end world hunger and poverty through self-reliance and sustainability. You are also welcome to donate directly to the charity here.

I suspect, in their travels, Heifer International volunteers encounter quite a bit of sand. Perhaps, with a little magic, they could put that to good use.

If you do not have the inclination or wherewithal to purchase the anthology or donate to Heifer International, I would still be happy to share this beautiful story with you. Just drop me a line at akontis at gmail, or fill out the little email form at the top right. No charge at all, just one friend to another. I only ask that you share this story with the ones you love. Perhaps Santa will leave you a little bag of sand under your tree.

Happy holidays, one and all!

One thought on “Once Upon a Christmas”