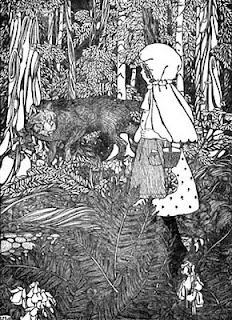 I had the good fortune of stumbling across a tweet a few months ago, advertising that Enchanted Conversations was accepting submissions for a “Little Red Riding Hood” themed anthology of fiction stories.

It was a wonderful discovery, because not only did I have a new place to submit to, but they also have a bunch of great stuff in the archives to read. All the issues have fairy tale themes. Why did I not know about this before? It’s a shame.

It’s even more of a shame now, since it’s been announced that the Little Red Riding Hood issue will be the last issue of Enchanted Conversations to be published. Thankfully all the stories are still archived, and hopefully they all  will continue to be…including mine. That’s right! My story, called “Hero Worship”, will be featured in this final issue.

The Little Red Riding Hood issue will be published online at the new website (www.fairytalemagazine.com) and will feature these stories:

I’ll let you know when this goes live.