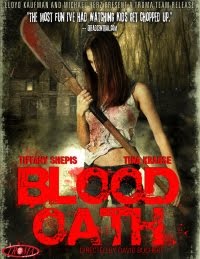 Reviews of a different sort — from the movie that became my second credit on IMDB. (Not only is my name in the opening credits of Blood Oath…it’s even SPELLED CORRECTLY!)

Before you read any–or all–of these, just keep one thing in mind: we didn’t set out to produce Shakespeare. We were a bunch of kids in the woods having a really good time with supersoakers full of fake blood. It was almost everyone’s first time, and it was an incredible (and expensive)  learning experience for us all.

If you want to see the awesome horribleness that is our beloved and infamous Blood Oath, I will have some copies (signed by the director!) for sale at my table at Capclave. See you there!

Summary: Mr. and Mrs. Krupp wanted nothing more than a healthy child. After several failed attempts, they contacted a mysterious woman who promised them a child but everything has a price. Now the offspring roams the woods as an urban legend, twisted and evil, living off the bodies of those who enter its sanctuary. Today, a group of friends on a weekend camping trip decide to investigate the story. Bad decision! They will have to fight to stay alive, but they will soon pray for death!

Here’s a great review from Matthew Scott Baker: “Let me summarize this film before I review it: FUN.” (Read the full review here.)

From DVDVerdict: “Blood Oath is one of the better independent horror films to come around in a long time. It doesn’t take itself wholly seriously, but does remember that shocks and suspense are more important than laughs and lame genre references.” (Read more)

The review in which Cinema Head Cheese says, “I can’t recommend Blood Oath in any way.” (Read more)

And possibly my favorite from BD Horror News, who hated the film so much that “there were so many moments that I would have liked for the killer to break through and put me out of my misery, that I am almost embarrassed.” (Read the rest here)

Heehee…I can see how this would get addictive. The horrible reviews are EVEN BETTER than the great ones!  I could do this all night!