Everytime I see those words, I hear Chris Carter’s Ten Thirteen production company credits from the end of The X-Files in my head. (Geek tidbit: The boy’s voice belongs to Nathan Couturier, the son of the show’s supervising sound editor, Thierry Couturier.)

I make stuff up for a living. It’s what I do. I’m told I’m fairy good at it. I think I could be better. I work harder. Sometimes, it works so well, it’s creepy.

Sometimes, I make things up, and they turn out to be real.

I probably wouldn’t have ever known it if I didn’t live in The Age of Google, but yes, it has happened. The biggest one was the made-up town of Haven, Kansas, in which I set my YA scarecrow-witch story (please, someone, hurry up and buy this manuscript before something else called “Haven” is released, thanks!). After I’d written the entire screenplay (It was originally a screenplay, which made for a great outline), I looked up “Haven” on www.weather.com to see what other towns in the US there were with that name.

There was only one. It was in Kansas. (Yes, I went to visit, and changed my manuscript accordingly.)

Earlier this year (or was it last year?) I started writing a silly ghost story about a haunted pickle (“The Revenge of Cap’n Pickle” — don’t get your hopes up; I never finished it). I used a bunch of friends from high school for character names, and I made up the name of the lake around which this campfire story was priginally told, basing it after the name of my high school, Spring Valley High.

There is a Spring Lake not ten minutes from us here in Northern VA. (I haven’t been there yet.)

So it happens. Life imitates art, and art imitates life. Then art becomes life. Like all the rest of the magic I’m surrounded with — I used to get creeped out about it. I don’t anymore. Now it’s just cool.

Enchanted–you know, that book that used to be called Sunday and is now coming out next May–takes largely from the original Grimm Brothers “Cinderella” tale, most importantly involving the role of the oft-overlooked Two White Pigeons. These pigeons roost in the tree planted on Cindrella’s mother’s grave. They are the ones who threw her the dresses she needed to go to the balls. They are also the ones who cried foul when the prince drove away with each of the stepsisters, who had cut off parts of their feet so that the shoe would fit.

In my story, one of these white pigeons has a spot on its breast that looks like a drop of blood. There is no precedence for this affectation–it is all of my own doing, made to illustrate my main character’s broken heart. There cannot be love without loss.

So you can imagine my estatic cry of holy crapness when I received an email from my dear friend and ex-sk8r grrl Tracy in TN containing pictures of “Beautiful Birds Seldom Ever Seen” and saw this: 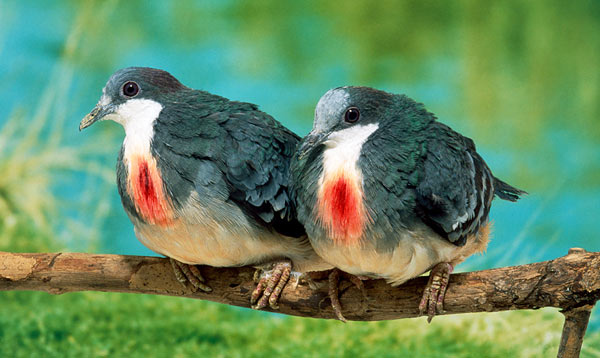 They are called “Luzon Bleeding-hearts”, and while they are not solid white (fairy tales are allowed poetic license), they fo have white breasts upon which the red splotch looks EXACTLY HOW I IMAGINED IT WOULD ON MY BIRD.

The Wikipedia entry also tells about claims that the female of this species has purple irises, of which I know Tamora Pierce would be very proud. I love my magical birds.

Do I think it’s possible that the Luzon Bleeding-heart might have made an appearance in the real “Cinderella” fable? Probably not. They are not white pigeons, only partially so. They live in the Philippines, and while the Grimm Brothers wrote of Cinderella in a European setting, it’s also thought that the tale might originally hail from dynastic China, when the binding of feet was seen as fashionable and tiny feet were a mark of exceptional beauty.

One thought on “I Made This”