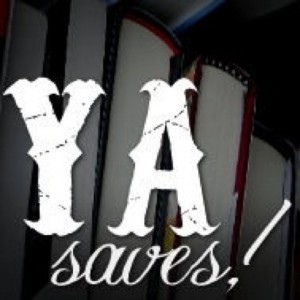 I have a lot of hours at the bookstore this weekend, so I crashed last night shortly after this Wall Street Journal article came up in conversation on Twitter and Maureen Johnson started the #YAsaves hashtag. My only regret is that when I woke up this morning I missed all those inspirational tweets…but I’m starting to see that they’re being archived online. Good.

Obviously, this issue of the quality of fiction being read by teenagers is a pretty big deal to me. My goal in life is to write books that will mean as much to some young person as Tamora Pierce and Lloyd Alexander and Roald Dahl and Diana Wynne Jones and all the others meant to me when I was twelve. Two summers ago, I wrote down a list of my 21 most influential books. Looking back on them now, I realize that only *one* (Me Talk Pretty One Day) was read when I was older than nineteen.

I asked my mother once why she never did anything when I came home crying almost every day in the sixth grade. Her answer was straightforward and honest: “I had no idea any of that was happening. You’d come home and go straight to your room and never come out.” To be fair, it’s true. And what did I do up there? I read books and I wrote stories.

What the #YAsaves hashtag wants to know is *why* I did that. Why did a genius ten-going-on-eleven year-old girl who was hitting puberty so hard it literally made her bones ache, who found solace in food and Star Trek when her best friend in the whole world broke up with her for absolutely no good reason, hide away from people who might have helped her? Why did she close off the outside world and go live somewhere else?

The answer is as obvious as it is silly: I didn’t think anyone in *this* world would understand me. My little sister wasn’t as old as me yet, my big sister was too much older and lived too far away, and my mother had her own childhood stripped away and couldn’t relate to me. They didn’t know what it was like to be me, in my situation, with my feelings. I might have looked just like all of them–I am the spitting image of my mother–but inside, my heart and nerve and sinew were vastly different.

Skimming the surface of the #YAsaves tweets, so much is similar. There are fish-out-of-water stories. There are boys and girls who were so full of loneliness and depression that they contemplated or attempted suicide. YA fiction provided an escape from everything, up to and including alcoholic parents, rape, and abuse. Reading was where we all went to understand, to be understood, and to not be alone. YA literature reminded us all that we had the power to control our destinies and change the world.

In one hundred forty characters or less, I might say: “YA fiction helped me raise myself.” Of course it did. Not only did I become a worldly child, I became an other-worldly one as well. My tolerances went beyond race and creed and sexual orientation to species of aliens and shimmering gods and whether or not you could use magic, and if you could, whether or not you used that power for good or evil. If you put good things into the world they came back to you, and bad people got punished. I was challenged to be the best person I could be, to push my limits far beyond my reach, to think so far outside the box that it didn’t look like a box anymore.

These people–these fabulous authors, and a good chunk of them British–were my friends. They knew my pain and suffering and could translate it into something beautiful. Even better, THEY WERE ADULTS. Which renewed my faith in the belief that it actually was possible to mature and yet still not forget what it was like to be a kid. We must grow older, but we never have to grow up. And I didn’t mean to.

There is hope in this world. Our children are our future. What they take from a book won’t be the same thing you take from a book, because they don’t need what you need. They don’t know what you know. They are blank slates, and you must trust that you have raised them well enough to be able to make their own decisions to be good, caring, unselfish people who will seize their destinies with both hands and chase after that dragon with no fear.

In fact, I dare you to try and stop them. Have you ever known anything to stop a teenager? Ever? My parents told me I couldn’t major in English when I was a teenager. And we see how well that worked out.

If you are on Twitter, tell us what YA literature meant/means to you and use the #YAsaves hashtag. If you are not on Twitter, I encourage you, as always, to share your stories here.

Now I’ve got to go get ready for my shift at the bookstore. Yes, I am a bookseller AND a YA author. Today I have the most rewarding jobs of all time.