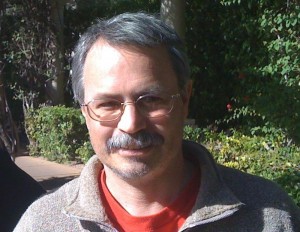 Rick is also a fellow member of the Codex Writers Group and a sci-fi geek. We girls like our sci-fi geeks, even if they do live on the sun (a.k.a. Arizona).

Rick is also the only person I know who doesn’t like pie. Oh…wait…maybe it’s not *that* kind of pie…

Coffee or Tea?
RN: Coffee in the morning, iced tea later in the day.

Travel the World or Travel Outer Space?
RN: Travel the world because I already travel outer space in my writing.

Music or Silence (while you write)?
RN: Usually silence because I tend to focus on how a piece of music is arranged when it’s playing, so I can’t focus on writing.

What is one of your most irrational fears?
RN: Pi

Will you be watching the Royal Wedding? Why or why not?
RN: No. I’d rather watch paint dry.

How many novels/short stories/screenplays/poems/etc have you published?
RN: Something like 40 short stories. Novel forthcoming (indie).

How much do you write every day?
RN: I’m very inconsistent. Some days 3000 words, other days nothing.

How much do you WISH you could write every day?
RN: NaNoWriMo pace is very productive and not too terribly unrealistic, if one isn’t pulled in several other directions at the same time.

What are you working on now?
RN: Final copy edits of my first novel, Neanderthal Swan Song.

If you could write like one author, who would it be?
RN: Isaac Asimov is my literary mentor because his writing disappears behind the story and that’s what I strive to do.  On the other hand, if I had Harlan Ellison’s mastery of the English language, I’d definitely use it.

If you could be one superhero, or have one superpower, who/what would it be?
RN: Control over time would be nice.

What’s the coolest thing you’ve ever done?
RN: Thomas flair on pommel horse. It’s the move Kurt Thomas does between 1:54 and 1:56 in this video.  I also used to do a parallel bars mount like the one he does at 2:18.  http://www.youtube.com/watch?v=RMVXzytMe8g

What’s the coolest thing you’re about to do?
RN: A few days ago, I received some killifish eggs in the mail from a guy in Malta.  Nothobranchius guentheri.  This fish lives in water that dries up par tof the year, so they hatch and die of old age in the same year.  Because the eggs can survive a dry season in a kind of suspended animation, you can ship the eggs around the world.  These are scheduled to hatch in late June.  It will be the first time I have tried to hatch killifish eggs and I will be blogging the experience with photos.

Name three things on your List of Things to Do Before You Die.
RN: See penguins in the wild.
Repopulate the native habitat of a species of fish extinct except in captivity, using specimens that I have kept and bred in refugium.
Get all the novels out of my head so people can read them.

Rick Novy lives in the Sonoran Desert city of Scottsdale, Arizona.
His education is technical, holding degrees in physics, mathematics,
and engineering.  Through his career, he has flown satellites, helped
develop surgical implants, and worked with various integrated circuits
and sensors.  He has also taught in the mathematics department at the
local community college. He started writing seriously in the summer of 2004. In 2005, he attended
Orson Scott Card’s Literary Boot Camp.  Since that workshop, his fiction has appeared
dozen of times in both online and print venues.  Learn more:  www.ricknovy.com