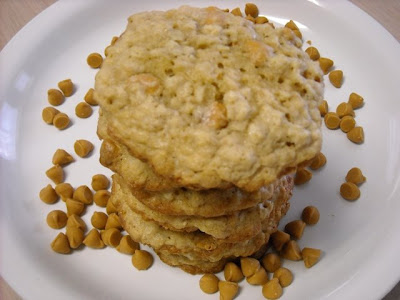 I’ve heard some good things about this Warehouse 13 show on Syfy (I still hate typing that spelling), so I downloaded the first episode to watch it. I don’t think I made it twenty minutes. Saul Rubinek is not John Noble, the secret agent guy is not David Boreanaz, and I have no idea who the secret agent chick was trying to be, but she was failing miserably, poor dear.

There was far too much exposition and far too many questions, instead of just throwing our main characters in a box and forcing them to learn what’s going on to get out….whatever. This is not a review of the TV show (since I didn’t watch enough to warrant an educated & objective opinion). This is about what the TV show brought into our lives.

As a throwaway line to convince the agents to come inside the warehouse, Saul Rubinek offers them cookies. (To which the male agent says, “Ooh, cookies!”) Thusly lured inside, Saul begins the exposition and starts answering an endless stream of silly questions, answered equally as sillily, and once by a ferret in a magic pot. Yeeeeah. I, the writer, is still wondering when said cookies would appear, since if *I* had been the agent on the scene, I would be expecting them.

I am one of those folks–stop reading here now if I’m going to offend you–who doesn’t care for raisins. I’ll eat them politely, but they’re not my first choice. Putting them in an oatmeal cookie just ruins them. Who thought of that?? And who thinks it’s still a good idea? Put chocolate or something in them for gods sake, if you have to put something. Raisins just throw off the consistency.

But butterscotch? Now there‘s a plan.

I then, of course, had to find a recipe. A GOOD recipe. (“Good” typically means ignoring calories. Just don’t go crazy.) I searched a couple of websites that told me following the recipe on the butterscotch package was just as good as anything (hmm), and a lot of the recipes I saw had the same basic ingredients. Ultimately, I based mine on a recipe from Paula Deen — I would paste the link here, but I tried to Google it later and could not find it. I’ve never met Paula, nor do I watch her show, but her sons were rather wonderful to me once, so I have a soft spot in my heart for the Deen family.

These are some of the best “cookies” (we just spread them out in a pan and made them like brownies) I’ve ever had. I highly recommend them. Be sure you’re making them for about 20 people, or there’s a real danger of eating yourself sick on them.

Preheat oven to 350 degrees. Grease your pan (I use butter & flour, or a little bit of olive oil.) Mix everything (start by beating the eggs really well) & dump it in the pan. Depending on your oven, this should take about 20 minutes.