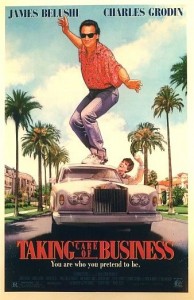 Having a big sister who married into the Movie Moghul family of Burlington, Vermont means that I’ve had almost unlimited access to free movie posters for the last thirty years. They covered my room growing up — all over my walls (Die Hard II, Indiana Jones & The Last Crusade) and, much to my mother’s chagrin, all over my ceiling. I saw them every time I laid back to dream: Crybaby, Sidekicks (RIP Jonathan Brandis), Enemies A Love Story, Pure Luck, Twins, and Taking Care of Business. I hadn’t actually seen all of the films, but I loved the poster art. What drew me to Taking Care of Business was the tagline: You are who you pretend to be. It just had this amazing ring of truth about it.

In my twenties, after I moved to Tennessee, I started watching that show Ally McBeal, where Peter MacNicol’s character introduced the concept of “Smile Therapy.” It’s a real thing — studies have shown that if you force yourself to stand up straight and smile like an idiot, you’ll actually feel happier. Happy is as happy does, essentially. MacNicol had great fun with this on the show…but who says life can’t imitate art?

When I started girling-up — wearing dresses and makeup and acting the princess that I am today — I first thought about it as a costume. It was easier that way. I pretended going to work was like going to a convention — something I did all the time. I never hesitated a moment to walk out in four-inch corset boots or full Neil-Gaiman’s-Death makeup…how different was a skirt and some eyeliner?

I remember the first time I effectively took Smile Therapy on the road — it was the very first Hypericon. I was in the throes of exhaustion and only days from taking myself to the doctor (a rare occurrence, to be sure). In my bag I brought two sets of clothes: one set to wear if I just felt more horrible than horrible, and one set if I decided to be cute and act the part.

The jeans and t-shirts never saw the light of day, and I had one of the most memorable weekends of my life.

Several years later, at the same convention, I remember riding down to the lobby in the elevator on Sunday morning in my maroon halter-top dress and having someone ask me where I found the energy to be so consistently cute and amazing. That’s not to say that I never crashed — oh, I did and still do (especially after Dragon*Con) — but I just put on the attitude with the outfit. Call it Method Acting or Smile Therapy or whatever you will…it certainly does the job.

This all occurred to me last night, at part one-of-two of the Stephen Kellogg and the Sixers concert last night. (Last night they performed the Glassjaw Boxer album; tonight is The Bear.) Happily, one of my favorite songs is on Glassjaw Boxer — it’s called “In Front Of The World.” Stephen wrote the song for his little brother before he went off to college to impart some worldly wisdom (which, Stephen told us last night, his brother summarily ignored). The song starts out:

Well, it’s hard to live in front of the world.
There’s only so much that you can pretend.
Write down what it is you’re thinking.
Take each day as it comes.
You never know what’s hanging ‘round the bend…

I’ve been feeling a bit in the doldrums lately — I’ve had nothing but major changes in my life for almost nine months now, and the hits still keep on coming. Nothing particularly impossible, and plenty to look forward to, but every step has been pretty darned life-altering. Some days I feel like I’m drowning in a state of exhaustion from which I’ll never surface. Like last night, for instance. I broke out the big guns — curled hair, cute dress, Alice in Wonderland shoes. I ignored the rude people behind us who talked to their kids through most of the show (thank you for leaving before the encores), and when we were allowed to get up out of our seats and dance, I be-bopped my little heart out and sang (when I knew the words) with my Fairy Goddaughters until my voice got husky.

I felt cute and wonderful (and very warm) all night long, and I had a great time. But when Stephen sang the first verse of that song, the pathetic little me underneath all the Smile Armor perked her ears up and listened. It is hard to live in front of the world and, coincidentally, I keep an ongoing list of things I need to do beside me at all times. The only thing keeping me from marking things off that list is me (and timing the DMV so I don’t have to renew my car tags until August).

If I can put on the smile and go to a concert, I can certainly wake up in the morning, put on that same smile, and get my ass to work. I’m not one of those folks who “needs to be inspired” or “needs to find my Muse” — the Muse is in the momentum. But nothing started is nothing finished, and the less I get finished, the longer this pseudo-depression might last. You guys know me enough to know I’m not a big fan of that apathetic crap. I’m more of a “take each day as it comes” kind of girl. And that’s exactly what I plan to do.

Tomorrow there’s a Kontis-Mitchell family reunion (the Greek side). I haven’t been to one of our reunions (when they’ve occurred) in five or six years. I now live close enough to attend. It’s been so long since I’ve lived so close to family…I miss them all immensely. I can’t wait to see them all. But that’s tomorrow. For now, the sun’s rising, and today has come. We’ll take this one first. Happy Friday to you all. Smiles on, everybody! 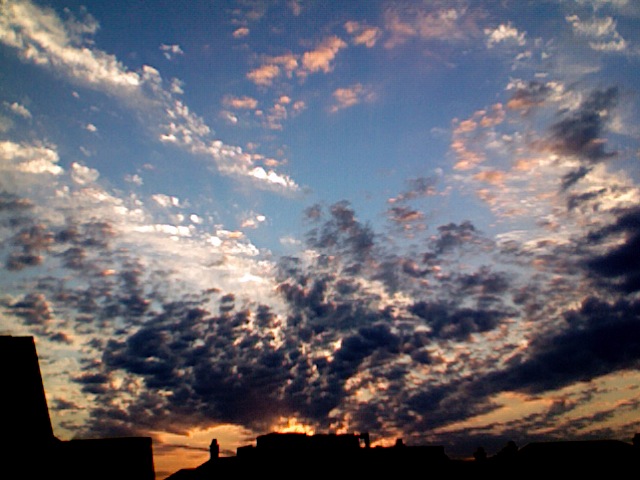