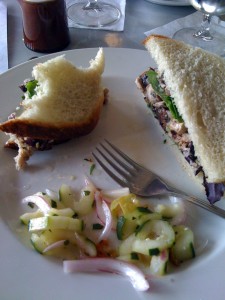 Over the years I’ve developed some quirks, as any decent Crotchety-Old-Woman-in-Training worth her salt would do. I value the truth, however brutal. I appreciate the element of surprise and abhor hints. I don’t read the dust jackets of authors I already know I like. I eat dessert first, whenever possible. And I pick the strangest thing on the menu.

My grandmother was a child of the depression born of immigrant parents, and a single, working mother of five children. In turn, my mother raised us to be frugal. It took me many years as a buyer, after countless dinners where the publisher picked up the tab, to stop looking at the prices on the menu and actually choose something I wanted to eat.

Publishers always wanted to take us to the newest, trendiest restaurants. In the end it was the company and conversation that mattered, but since we already knew that was up to snuff, why not change the ambiance? While lunch was always an endless subject of debate, where to go for dinner never seemed to be a problem.

It all started with dessert. Appetizers are fun, salad ends up being whatever has goat cheese (I’m a sucker for goat cheese), and the entree was usually divine, either deliciously or artistically (more often the latter). Dessert was just a bonus–a reason for us to order coffee and keep talking just a little bit longer. By then, you’re not actually hungry for anything (thus the “dessert first” rule). So what does it matter what you order? Most creme brulees and cannolis and tiramisus–while yumtastic–are usually the same (unless the chef specializes, so it’s always good to ask). You know what you’re going to get. So why not go a little crazy?

Inevitably, there’s something that sticks out on the menu. Hand-churned ginger ice cream. Cake made with a cheese you’ve never heard of, topped with a berry you’re fairly sure doesn’t really exist. Chocolate fish. The ominous ingredients are like a dress that looks hideous on the hanger. If there is a reason for everything, then there is a reason that chef (or that designer) put those exact things together in such a way. It wouldn’t be on the menu if it wasn’t edible. You’re not even really hungry anyway…so where’s the risk? If nothing else, it gives the table something else to talk about over coffee.

Next time you’re in a fancy restaurant–you know, one of the ones with a seasonal menu and words you swear are English but still can’t interpret when put together–pick the strangest thing on the menu. Go on, I dare you. If you’re not quite so brave, just try the dessert. And get spoons for everyone.

That’s another rule. Like magic, dessert is meant to be shared.