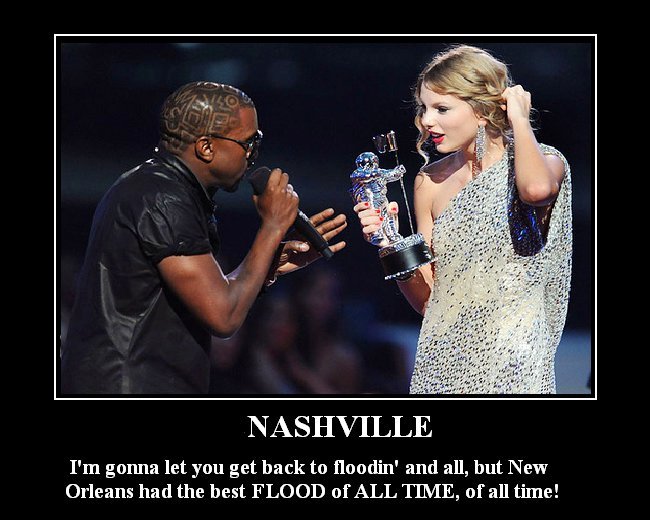 For us optimists, it takes a little longer for these things to sink in. When I heard on the radio that a plane had hit the World Trade Center, my mind saw a little private single-engine Cessna, owned by someone with too much money and too little sense, clipping the side with its wing. When we checked the weather Sunday morning before leaving Mo*Con and I heard there was flash flooding in Nashville, I shrugged. It’s April. There’s always flash flooding in April.

Back in 2003, a storm cell swept through Murfreesboro and attacked my house and car with hail. I spent the night huddled in my bathtub with my teddy bear and a flashlight. I couldn’t look out the window without my legs shaking uncontrollably. TEMA stepped in and let me completely refinance my house. (I bought my first laptop when the insurance adjuster totaled out my car.) Just last year (late March this time) a tornado destroyed the Boys and Girls club at the end of my street. Not long after that, another crew of tornadoes ripped through Murfreesboro and turned it into a war zone. You might remember this video. I used to joke about how I’d one day move to a place where storms didn’t have a body count. This has been the first April in almost a decade that I haven’t spent the entire month afraid for my life and my worldly possessions.

So yes, when I first heard of the flooding in Nashville, it was just another April, another boy, another wolf. And then my friend Mary sent me a Tweet telling me Lillie’s house had flooded. 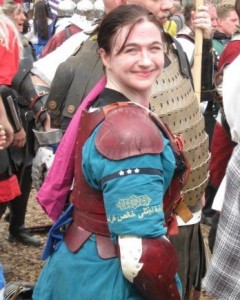 You guys remember Lillie — the valkyrie, the goddess, the best friend who could kick your a** and has the armor to do so. You’ve seen her at SCA events or at Dragon*Con dressed like a goddess, or a ninja, or a belly dancer, or Wonder Woman in a prom dress. She’s a book buyer, a costumer, and she’s attending night classes in order to get her MBA. My mother calls Lillie “my angel” because she crawled under my house the day after Christmas to help me find exactly which pipe was hemorrhaging water like Old Faithful. Lillie had this chair in her office at work — a place I still wish I could go plop myself down into and unload my troubles. And when I decided to pull a Phoenix, Lillie was the first person I called. She didn’t even try to talk me out of it. Much.

When Lillie had surgery, I was at the hospital waiting on her when she got out — it wasn’t even a question. So you’ll understand when I tell you that the thought of me being up here in PA while she’s in a hotel room because her house has been declared a biohazard and her school books and notes have all been pulped and her car is dead and her laundry–con clothes, work clothes, SCA garb, all of it–has been scattered to complete strangers to wash…well, it makes me a little sick and a little mad that I can’t be there helping because I know I should. I talked to her yesterday on the phone. She would have told me not to come anyway.

See the thing is, Tennessee is full of pretty freaking amazing people. Lillie’s had a dozen people in her yard helping out every day. That woman who took 30 loads of Lillie’s laundry? She stopped at the Publix to buy laundry soap & fabric softener and the manager refused to let her pay for it. Lowe’s had set up donuts for snacks and free cleaning supplies at the civic center for residents to use as needed. One friend had pizzas delivered to the house for everyone working because they couldn’t make it. Lillie said she and her husband have been humbled by the outpouring of love and support. 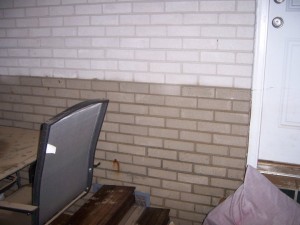 As the body count rises I am also relieved that my friends are alive and well (the photo here shows the water line in Lillie’s sun room. Their cat climbed on the table and was treading water by the time they got home). But that doesn’t change the fact that they’ve lost a lot of things that can’t be replaced. (Like the beautiful hardwood floor she and Chuck spent all last year installing…it breaks my heart.)

And Lillie’s not the only one who’s been affected. Another friend of mine just recently lost her mother. Now she’s lost her house too. Mike and Janet Lee spent the entire time bailing thousands of gallons of water out of their basement in East Nashville. And every message I got scared me more than the last. Janet sent me a Facebook post telling me it was like a war zone — something on the scale of New Orleans.

Murfreesboro (thankfully) was not hit as badly, but there’s four feet of water in Titans Stadium, the Opryland Hotel is an aquarium (the former inhabitants of the *actual* aquarium are all dead), and last I heard they were going to have to purposely flood the city of Gallatin in order to relieve the pressure on one of the major dams before it broke and caused more trouble. I may not officially live there anymore, but I was in Middle Tennessee for a third of my life. I still have a house there, and there are pieces of my heart buried in that rocky soil. My friends are going to be recovering for a long time after this, and I will be worried about them until every brick and floorboard and layer of drywall and screw on their cars are shiny and new again. 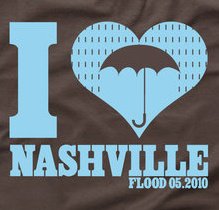 But we know the truth of that. We move on and we make new memories — we write songs about it that hit the charts — but things are never shiny and new again.

I meant to post about this yesterday, but I’m glad I didn’t, as so many more sites have popped up in the last few hours. Be sure to check any — or all — of these out:

*  Visit NashvilleRedCross.org and click to donate OR arrange to volunteer.
*  Text REDCROSS to 90999 to make a $10 donation on your mobile phone
*  Call (615) 250-4300 to make a donation by phone
*  Mail a check to the Nashville Area Red Cross at 2201 Charlotte Avenue, Nashville, TN 37203
* Do the Write Thing for Nashville Flood Relief: raising money for flood relief in Nashville by auctioning off critiques and more from your favorite authors, agents, and editors.
*  Nashville Flood Relief T-shirts: (I love the designs) — so far it’s only a Facebok page, but they’re working out the pricing and details so folks can start ordering.
*  MUSIC CITY DISASTER RELIEF: A Facebook group dedicated to the flooding. They’ve been sending really great, up-to-the-minute information to my inbox about what’s going on. For instance: the mind boggles at the amount of instruments musicians have lost…they have details for those folks if you are one of them.

For those of you wondering if I’m going to be putting together a Nashville relief charity anthology like Elemental — well, I’ve had less than 24 hours to think about it and details are still sort of being hashed out as to its possibility and feasibility. I promise…if something like that happens, you’ll be the first to know.

As more charities and ways to help and whatnot pop up, please feel free to add them in the comments. Thank you!