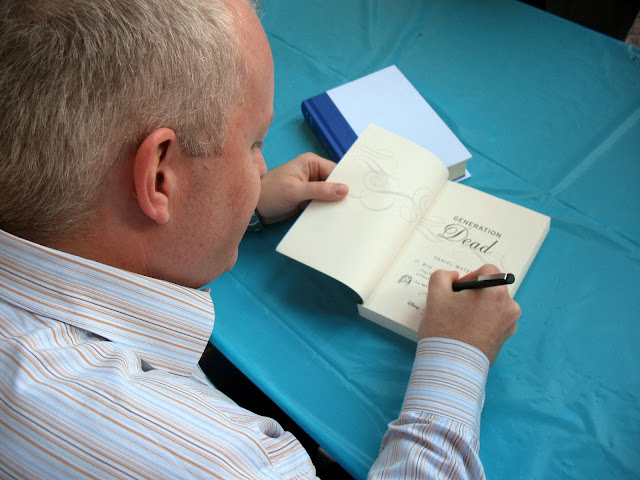 When I met Daniel Waters at the Southern Festival of Books here in Nashville this year, he had no life. Specifically, his one-line bio was something along the lines of “Daniel lives in Connecticut with his family.” Outraged at the oversight (and a little frightened of meeting a person who really had nothing more to say about them), I concocted a much more colorful history with which to introduce him at our “Young, Fanged, and Undead” panel. In appreciation (and because he’s just that awesome), he answered these interview questions for me in about 12 hours, reciprocating in the same witty spirit.

And no. We’re not telling you whether or not zombies are real. Some things you just have to decide for yourself.

Alethea Kontis: What were you like in high school?

Daniel Waters: My standard answer is that I was a near-perfect mix of the five personalities from The Breakfast Club, meaning that I am equal parts Brain, Criminal, Athlete, Basket Case, and, um, Princess. The reality is that I was probably about 95% Basket Case, even if I tried to look all Criminal on the outside.

You know, teen readers ask this one often, and I think what they are really asking is, “Will I be okay?” And the answer is, “You will.”

AK: I was struck by how poetic the chapters written from the Zombie POV are. Do you write–or have you ever written–poetry? Any favorite poets?
DW: Why, thank you for that–I tried really hard to get somewhat experimental things like the speech pauses in Generation Dead and the “first person, zombie” POV in Kiss of Life down correctly. I’ve never written poetry and don’t really consider myself to have an aptitude for it, but admire and have great respect for those that do. Some of my favorite poets are Langston Hughes, James Scully, Allen Ginsberg, Theodor Geisel, James Merrill, and Morrissey.

AK: Zombie walks are all the rage this year — do you participate in them?

DW: Every morning when I shamble from my bed to my coffee.

I’ve never been in an official zombie walk but they look like a lot of fun. Maybe I’ll get an invite someday from some friendly undead person.

AK: What do you think is the reason so many young folks have been drawn to the zombie “culture”?
DW: There are so many reasons to embrace zombie culture! I think in some ways, entering into a zombie horde allows a person to escape the terrible pressure of having to be an individual all the time. America especially places a very high value on being “unique,” and I think that can cause a lot of stress in hothouse environments like most schools. Zombification could be societies’ great equalizer. On the flip side, releasing one’s inner zombie is a fun way to be an individual in more polite society.

The culture, like many dark or horror based entertainments, allows young people to deal with any number of universal fears–fear of death, fear of disability or disease, social fears, etc. There’s something inherently pathetic and borderline humorous about zombies as well which also contributes to the whole cathartic experience.

It is easy to identify with a zombie, whereas it can be difficult to do the same with vampires, the superheroes and villains of the supernatural world. Zombies are us, but dead.

Plus, let’s face it, zombies are just cool.

AK: What’s your costume going to be this Halloween? Best costume you ever had?
DW: No costume this year, sadly. My best costume ever was probably Wez, who was the scary guy from The Road Warrior. My mohawk was about a foot tall. I was never a zombie (or a zombie cheerleader) but I was a Ghostbuster (a la Bill Murray) one year. I used an old metal canister that had most recently held a deadly insecticide for my proton pack, which probably wasn’t the brightest idea in the world.

AK: What were your favorite books as a kid?
DW: Favorite book as a kid is D’aulaire’s Book of Greek Myths. I read that one approximately one thousand seven hundred and fifty three times. I loved series books of all sorts, and science fiction, fantasy and horror especially.

AK: When you visit schools, what’s the question all the kids inevitably ask?
DW: “Are zombies real?”

AK: If you could travel back in time to visit yourself in high school, what bit of wisdom do you wish you could impart?

DW: “Keep in touch.” It is the same advice that I would hope my teenaged self would give if he traveled forward in time to drop some knowledge on me.

AK: Tell us a little about your New Year’s Eve goals. Do you have any idea of what will be on 2010’s list?
DW: I started doing New Year’s Eve goals the year after my daughter was born. Although I’ve always been blessed with a happy family life, there were a number of things I wanted to change about myself, both professionally and personally, and writing down what I wanted to change seemed to be the logical place to start.

I wrote “This Year Will Be Different” in black ink across the top of a sheet of paper. Item #1 was “I will henceforth write with blue ink”. I wrote this in blue ink, thus guaranteeing that at least one of my potentially life-changing goals would come to fruition. Then I wrote about a dozen or so other goals–some personal, some family, and some occupational–and folded the list in my appointment calendar, so I’d see it every so often. At the end of the year I spend some time reflecting on the list and what happened over the past 12 months, then I think about what I want the year ahead to look like, and then I add to the list.

I’ve got a number of writing goals on the list, although they tend to be mainly goals around the career and business side of writing life. Creativity, I find, resists legislation. I only write down things that I consider to be realistic and achievable; other than that I don’t have any rules. “Be invited into a short story anthology” was one I accomplished this year, and I’ll also get to check off “Be the author of a book I cannot read” soon, because my agent sold Spanish rights for the first three Generation Dead books last month.

One of the goals that have been on the list for a few years is the rather pedestrian “Have one of my works adapted for film or television”. I think I’ll also add: “Have two new books be published in a calendar year”. Time will tell.

DW: I have found good writing mojo at a small local library where I recently gave a talk. The librarians there won’t go as far as to say the library is haunted, but they have told me a few stories that are pretty interesting, like when they were having a discussion about wildflowers one night after closing. They heard a thud from one of the aisles, and when they went to investigate, a single book had fallen to the floor. The book, of course, was a guidebook on wildflowers. And inside, between pages 113 and 114, was a freshly severed human head.

I’m kidding about the human head part. I hear it was a really old human head.

I haven’t experienced anything supernatural at the library, except I think I’ve done some really good work there, and when the writing is going well it almost feels as though something supernatural is happening.

DW: Passing Strange, the third book in the Generation Dead series, will be out next June. Then I will do a non-GD book, but I’m not sure which yet because I have a few finished projects stacked up in my office like airplanes on the runway in Atlanta. I’d like to launch a new series next year.

AK: If you could be any superhero, who would you be & why?

DW: Well, the obvious answer would be Matter-Eater Lad from the old Legion of Superheroes, because he can eat anything he wants to and never gains any weight. But the one I’d most like to be is the Silver Surfer. Being able to surf through space at faster than light speeds would be the bomb. He’s shiny and smooth. And hey, you just can’t go wrong with the Power Cosmic.