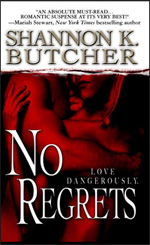 debuted last winter. Its follow-up, the sexy thriller No Control

, has just released, and it is already a favorite in the Secret Inner Circle of Ingram’s genre book club. Join me as I talk to Shannon about the Delta Force, chasing tornadoes, and life with her husband, author Jim Butcher (The Dresden Files).

Alethea Kontis: In No Regrets, your heroine is a genius cryptologist and your hero is a Delta Force operative–do you have a background in military or math or ancient history?

Shannon Butcher: No, I don’t have any personal background in the military or ancient history, but I took plenty of advanced math while getting my engineering degree.  In fact, I was only one class away from a minor in math, but I just wasn’t willing to stick around for another semester to get it.

AK: Were there any new challenges (or talents) you discovered while writing your second book?

SB: My second book was all about panic.  I’d sold it, but unlike the first one, it wasn’t written, so when I realized I had to write a second novel of publishable quality, I panicked.  I wasn’t sure I could do it.  The panic made me buckle down and write like crazy.  I finished the thing in 23 days and proved to myself I could do it.  The confidence I gained has been invaluable to me.

AK: You’ve gone from tornado chasing to engineering. What led you to contemporary romance? Have you always been a writer?

SB: I’ve always enjoyed writing, but it was never something I did outside of high school English assignments.  If it hadn’t been for my husband, Jim, I never would have even considered writing as a career.  He would be talking about how there was something wrong in one of his stories, but he didn’t know what.  I wanted to help, but had no clue how, so I told him that if he taught me what to look for, I’d help him find that illusive “wrong” he was looking for.  After a few years of having him teach me writing craft, I decided I wanted to see if I could write my own books, so in 2003 I did.  My early books sucked pretty hard, but No Regrets was the ninth book I finished and it was the first one I thought was good enough to try to sell.

AK: Tell us a little bit about your tornado-chasing days. (How cool is that!) Does anything scare you?

SB: I chased tornados as part of an undergraduate research project, and it was a fabulous experience.  I got to go up into military aircraft as well as chasing them on the ground in the instrument-laden cars we referred to as “geekmobiles.”  I experienced plenty of motion sickness, but never once felt afraid.  The scientists we were with knew their stuff and were careful of where they allowed us to go.  I always felt safe, so fear was never an issue.  It’s a lot more frightening waiting to see whether or not readers are going to like my stories than it ever was chasing a tornado.

AK: What would be your ideal writing environment? Where do you normally write?

SB: Right now I write in the living room in my comfy chair, but we’re building a house and I’m actually going to have an office!  With doors!  Of course, the comfy chair will have to go in there.  Mostly, I just need quiet to write, but I can do it anywhere, which is good considering how much we travel.

AK: What sort of research do you do for your books?

SB: I research only as much as I feel is necessary to make the story realistic and believable since I’d rather write than research.  I check facts and tend to use a lot of writers’ references like the Writer’s Digest Howdunit Series.  Luckily, I’ve lived in several states (I’ve actually moved across state lines eight times), so I don’t have to do too much research on the places I set stories since I’ve lived in most of them.

AK: What are the pros and cons of having a husband who is also a writer? I imagine your dinner conversations cover some interesting topics…

SB: Other than the fact that one of us always has a deadline looming, there aren’t a lot of cons to being married to an author.  We both have flexible schedules and really understand the demands of each other’s job.  Plus, there’s the added benefit of having a live-in critique partner.  We tend to talk about people that don’t exist and events that never happened more than the average couple, but it works for us.

AK: What were your favorite books as a child?

SB: I used to read a lot of science fiction and fantasy, like [J.R.R.] Tolkien, [David] Eddings, and [Roger] Zelazny.  I didn’t read my first romance until 1998, but since then, I’ve been totally hooked.

SB: Writing romantic suspense is great fun, and I plan to continue to write those for as long as people are willing to read them.  In addition, I love paranormal romance, so I hope to have the opportunity to publish some of those soon.