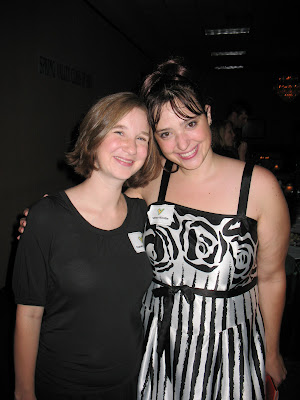 My BFF Casey recently tagged me on a Facebook meme, listing her "15 most influential books." I was intrigued. Bands get asked who their influences are all the time. What about authors? Think for a minute…which books were your most influential books? And I don’t just mean ones that you enjoyed, but ones that resonated with you so deeply that you remember them–you still have them on your shelves and can probably quote them–to this day.

My list started with eight and almost immediately expanded to well over fifteen. I’m pretty satisfied at twenty-one, though. Consider yourself tagged — which are your most influential books, and why?

1. Candide (Voltaire) — Mr. Stafford made us all read this in AP European History. Not only did he present to us the idea that we lived in the Best of All Possible Worlds, but he also let me in on the secret that *I* was the only one who could make me happy. He was my very own beloved Pangloss.

2. Alice’s Adventures in Wonderland / Through the Looking Glass (Lewis Carroll) — Much madness is divinest sense. Alice’s Adventures parallel so many events in my life and outline so many truths I live by…not the least of which being: "All the ways about here belong to me."

3. Collected Works of Grimm & Andersen — My maternal grandmother gave me this giant yellow tome of unexpurgated tales for my 10th birthday. My parents never expected me to sit down and read the whole thing, multiple times. They also had no idea that Cinderella’s sisters cut off parts of their feet to fit in the glass slipper or that the Little Mermaid killed herself. Whenever anyone made a fairy tale reference, I always felt like I had the inside scoop on what really happened.

4. The Princess Bride (William Goldman) — The first book I ever finished reading, and then turned back to the first page and started reading again. Ironic that the theme of this beautiful, perfect love story is that Life is Unfair.

5. Jovah’s Angel (Sharon Shinn) — When I first met Sharon Shinn I had her inscribe: "Enjoy reading this one…again." I reread Jovah’s Angel at least once a year. The setting and the characters and the plot and the prose are just utter perfection.

6. The Darkangel (Meredith Ann Pierce) — There’s the age-old question: "If you wish you could have written any book in history, what would it be?" This is the answer. I was twelve when I read this book, and I knew at that moment that this was how I wanted to tell my fairy tales.

7. Ender’s Game (Orson Scott Card) — This was the first book I read out of the "adult" section in the library, at Casey’s recommendation. I ended up checking it out twice because I didn’t get to it this first time. I still remember crying in the bathroom over Valentine’s letter because I literally couldn’t put the book down until I finished. And we all know how influential Scott ended up being to the rest of my writing career.

8. A Knight in Shining Armor (Jude Deveraux) — When I was old enough to break into the romance genre, Mom brought home a copy of this from the Friends of the Library book sale. Flawed characters, witty dialogue, a little bit of magic, and every woman’s fantasy.

9. The Man Who Took the Indoors Out (Arnold Lobel) — Strangely enough, this is one of the most difficult children’s books to find. Even Arnold Lobel’s Wikipedia entry doesn’t list it as one of his works. I read this at that inquisitive age of imagination that wondered…what if the furniture really was bored and wanted a vacation? (For that matter, whoever asked what order the alphabet wanted to be in?)

11. McDougal, Littell English Literature: Purple Level  — This was my high school senior-year textbook. Bored as I was stuck in a non-honors class, I did a lot of my own reading. TS Eliot’s "The Hollow Men", Kurt Vonnegut’s "Harrison Bergeron", Roald Dahl’s "The Landlady"…there were just so many good stories I couldn’t leave them behind. So I stole the book.

13. Anne of Green Gables (L.M. Montgomery) — Despite looking more like Diana and less like "Carrots," I had Anne’s romantic sensibility in spades. Trouble also seemed to find me in the strangest situations. It still does.

14. Little Women (Louisa May Alcott) — For many years, I read this book every Christmas. The family was a family, and the sisters acted like sisters, and I was Jo March — a writer whose chestnut hair was her only beauty. The only thing I hated was when Professor Friedrich tells Jo to "write what she knows." I’ve always hated that saying. What do I know? What does anyone know, really?

15. Alanna: The First Adventure (Tamora Pierce) — I can’t remember if I read this one or The Darkangel first, but the Pierces sat right together on the shelf in the library, so it was inevitable. Alanna of Trebond was a kick-ass heroine who eschewed social norms, got what she wanted, and paid the price for it. And George Cooper was my first love. *sigh*

16. Howl’s Moving Castle (Dianna Wynne Jones) — A book about the power of words and one’s own belief. As a little girl born an old soul, I completely empathized with the fact that our heroine spent most of the book in her eighties. Plus, Sophie, like me, had the stupidest taste in men. Could Howl have been more of a mess? I mean, really?

17. Custard & Company (Ogden Nash) — Like my grandmother, I started out a poet. Words are beautiful and powerful, rhymes have such a beautiful cadence, and telling a story that way is just fun. Ogden Nash agreed. Later, Shel Silverstein did too.

18. Me Talk Pretty One Day (David Sedaris) — David Sedaris, who also happens to be Greek, taught me that nothing–and no one–is sacred. All the stories–and there are a lot of them–that get brought up over the dinner table are fodder. I started a blog shortly after and just fell right into my natural voice. Because I could.

19. The Westing Game (Ellen Raskin) — I was a fan of Nancy Drew and Cam Jansen and Encyclopedia Brown, but Turtle Wexler put them all to shame. The Westing Game was the most logical book I’d ever read — a perfect puzzle where every clue (obvious or not) fit into place all the way  through to the end. Brilliantly done.

20. Goop Tales / Goops and How Not to Be Them (Gelett Burgess) — There are books about manners, but none are as fun and imaginative and memorable as the Goops books. From Askalot to Zeemesneeze, each rhyming biography outlined the traits a child should try to NOT have. Are you a Goop?

21. The Legacy (Casey Cothran-Muldrew, Alethea Kontis, Margo Mann-Appenzeller, Christopher McCormick) — My list would not be complete without this book…albeit it a book incomplete itself. Margo, Casey, Chris, and I co-wrote this tale all through high school, casting ourselves and our friends in a fantasy world full of curious Princesses, evil Sorceresses, and the most ethical Band of Thieves you’ve ever met (See #15: George Cooper). We grew as it grew, through notebooks and legal pads full of neat and messy and cramped and rounded handwriting. And though it was a great story with an ending we all agreed upon, the actual words never made it that far. Someday I may go back and finish that. Someday.

9 thoughts on “My 21 Most Influential Books”