Detective Kara Gillian is both a cop and a conjurer of demons, accidentally conjuring sexy  angelic Rhyzkhal during a routine spell. Now she needs his help to catch a deadly serial killer–The Symbol Man–who’s back in Beaulac, Louisiana on a killing spree after a three-year hiatus. There’s also that handsome-yet-disapproving FBI agent hanging around, messing with both Kara’s heart and her first homicide case. 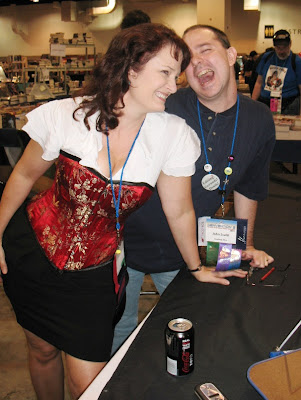 Mark of the Demon by Diana Rowland is a delicious blend of police procedural and urban fantasy. In honor of its release today, I have an interview here with the author herself! We had a lot of fun. (Almost as much fun as John Scalzi had with Diana at last year’s WorldCon. —->)

I also reviewed Mark of the Demon in my most recent column for Orson Scott Card’s Intergalactic Medicine Show. I thoroughly enjoyed the book, and blew a whole Saturday reading it in one sitting. I miss those days.

If you’re like me at all and yearning for a fun, smart urban fantasy that isn’t cashing in on the whole vampire wave (I am so tired of vampires…and no, Dark-Hunters don’t count) then be sure to pick up Mark of the Demon at your local bookstore today!

Alethea Kontis: How long have you lived in Louisiana?

Diana Rowland: The simple answer is 22 years. However, those 22 years weren’t consecutive.  I was born in Louisiana, and then my family moved to Florida when I was about a year old. Then, when I was in fifth grade, we moved back to Louisiana, and lived there until I went off to college at Georgia Tech. I lived in Atlanta for eight years, then moved back to Louisiana and got married. Lived there for about two years, and then moved to the Mississippi Gulf coast. In 1998 I got divorced and finally moved back to Louisiana, where I think I’ll be staying for a while. You’ll notice that I’ve never lived north of the Mason-Dixon line, so I’m definitely a life-long southerner!

AK: THANK YOU for not writing about vampires. (Which is not really a question, but I’d still love for you to comment on this.)

DR: I really have nothing against vampires, or vampire stories, however I think I have to agree that it’s a topic that’s quickly approaching the point of being done to death. The problem I’m seeing right now is that people who still want to write about vampires are desperate to make their vampires different, and thus will change the mythology in some major way to show that they’re not doing the same old tropes. But if the themes and the stories and the angstiness is still the same, then it doesn’t matter whether your vampires can live off synthetic blood or sparkle in the sunlight or are a benevolent alien race. What I think makes a good vampire story is, as with anything else, the story. Not the physiology of the vampires.

AK: Can we look forward to more Kara Gillian adventures?

DR: Yes, you can! The next book is tentatively titled Blood of the Demon, and is currently scheduled for release in February 2010. I do have more books planned beyond that, but contracts for those will have to wait on the dreaded-yet-important sales numbers for Mark of the Demon.

AK: Given your widely-varied background did you prefer being a cop or working forensics?

DR: I loved being a cop. LOVED it. Don’t get me wrong–there were times when I disliked the job. It had the capacity to be miserable and stressful, or incredibly emotionally painful, but I loved being a part of the brotherhood, and I loved the excitement of the job and the feeling that I was a part of making the world a less chaotic place. That being said, the forensics and crime-scene end of things was fascinating and appealed to my geek nature. However, being a street cop and a detective was more an intrinsic part of my total psyche.

AK: What do you think of CSI and the legion of similar detective/forensic shows?

DR: This is very much a hot-button topic with me and I could probably go on for pages, but I’ll do my best to rein myself in. On the one hand I recognize that these shows are incredibly popular and successful, and they’ve done a great deal to introduce the public to an area of law enforcement and the judicial system that most people had no idea existed. However, the majority of the shows (and CSI is probably the worst offender) are utterly rife with inaccuracies and outright science-fiction that’s being played off as reality. The enormous drawback to this is that the general public has a tendency to take this fictional information as fact, and thus expects that every crime will be investigated by a legion of well-dressed crime scene investigators, who will employ all of the latest and greatest technology, collect oodles of evidence, and get lab results back in days, if not hours.  The sad backlash of this is that crime labs are now horribly swamped because of the public demand for every possible forensic test, and there’s no understanding or patience on the part of the public for the fact that equipment, testing, and personnel cost money (usually tax money), and lab results take months, or sometimes years, to come back.  There’s also an even more disturbing trend for jurors to acquit defendants in the absence of rigorous forensic testing, even if the existing evidence is more than sufficient to prove guilt.

I certainly don’t suggest taking these shows off the air, but I’d love to see the public become more aware of the realities of forensic testing. And, I would urge people to please vote for taxes that fund their local police departments and crime labs.

AK: As a woman, what physical activity/class do you recommend I should do/take to best protect myself?

DR: Personally, I think that every woman should take martial arts. I don’t think it matters what style you take, but you should take it for long enough that you earn your black belt or equivalent. It’s really not so much about knowing how to fight and “kick ass” as it is about having the self-confidence and self-esteem to be willing to either face a bad situation, or remove yourself from it.

That being said, I have a personal bias toward “realistic” fighting styles such as Hapkido (in which I hold a black belt), jiu-jitsu, or kenpo–well-rounded arts that focus on grappling, joint locks, and throws as well as punches and kicks.

AK: Do you have any relatives with supernatural powers?

DR: My sister can organize ANYTHING. Seriously. She needs to run the world.

DR: Hank Reinhardt, the late husband of Toni Weisskopf and former owner of Museum Replicas, made the BEST sweet tea EVAH.  I’m not sure what brand he used (though I believe it was plain ole Lipton), but he would boil a big pot of water with six or seven tea bags in it, and then add the sugar while it was still boiling hot. Then he’d pour it into the pitcher and add ice. But the thing that made his tea utterly awesome was the fact that he didn’t use lemon. Instead, he had a small fruit strainer, and he would strain half a lime into his glass of tea.

It was bliss. I’ve tried to recreate it many times, and have never quite managed it.

AK: As if Hank could go up any higher in my estimation that man was truly a superhero. Which begs the question: if you could have any superpower, what would it be and why?