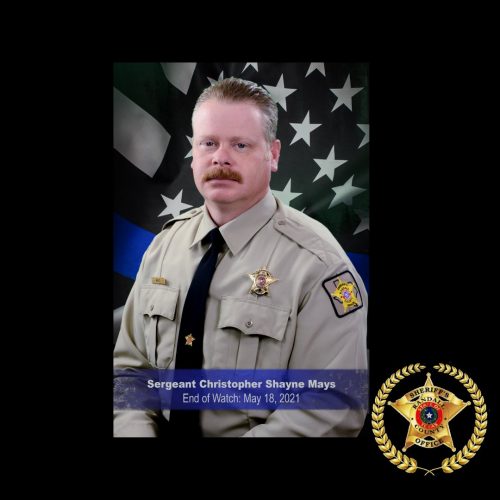 Today was a storm chasing travel day, as we relocated from Lubbock, Texas to Northeastern Colorado. As soon as we left Lubbock, traffic was…strange. Stop and start. I saw blue lights when I changed lanes and assumed there was maybe an accident up ahead. But we never actually arrived at the accident. The blue lights stayed ahead of us. They were joined by more blue lights, and more brake lights.

And then we went went under at least three fire trucks spread out along an overpass, lights flashing. The middle truck had an American flag hanging from the ladder.

“This is something,” I told Chris. “It’s not Memorial Day yet, but this is some kind of memorial.”

Even on the other side of the divided highway, cars pulled to the side of the road as the flashing procession passed. At almost every exit, LEOs were waiting with their lights flashing, and they joined the line.

And we just happened to be directly behind them. The whole way. We were the closest car to the funeral procession without being IN the funeral. It was a bit scary with the stop-and-go traffic around overpasses, but there were people waiting on almost every one, hands over their hearts.

When we drove through Canyon and saw the first round of men on the overpass saluting, I actually broke down in tears.

By the time we arrived in Amarillo, the train of flashing lights was well over a mile long. No one passed them on the road–we all kept pace. It was so beautiful. And touching. And sad. (And harrowing, traffic-wise) I was honored to have witnessed such an awe-inspiring and deeply personal event. I thought about my nephew Josh, whom we lost all those years ago now, and I thought about Sergeant Mays…not much older than me…who was obviously loved by so many.

Rest in Peace, Sergeant Mays. Whenever it’s my time to go, I hope the love that surrounds me is enough stop traffic.